At the outset, I must confess that I’m not a flint-knapper. I know! I know! Then I shouldn’t try to comment on a lithic analysis. But wait! I don’t intend to tread on the toes of those whose métier it is to break rocks into smaller pieces. Rather, this is intended as an intellectual exercise–one that applies to the way in which archaeologists classify things in the first place (i.e. typology), the way those types can become reified categories (the ‘finished artifact fallacy’), and the whole question of pre-modern human cognition versus that of us, the most recent Hominina. (By the way, for what it’s worth, some of my best friends are flint-knappers.)

Before I can begin to lay out my reasons for being suspicious of claims for ‘true’ blade manufacturing in the Middle Palaeolithic, there is some necessary background to be given. Blade is the term given to

… flakes that are at least twice as long as they are wide and that have parallel or subparallel sides and at least two ridges on the dorsal (outer) side. Additionally, a tool must be part of an intentional blade industry in order to properly be considered a blade; tools which show the characteristics of blades through variation but are not intentionally produced with those characteristics are not considered true blades.

Thus, the term blade also connotes modern human behaviour, and as such to have discovered an intentional blade industry as far back as 200 to 300 kya would indeed be extraordinary. And that’s why I’m immediately sceptical about the claims made yesterday in “Systematic blade production at late Lower Paleolithic (400–200 kyr) Qesem Cave, Israel,” by Shimelmitz, Barkai, and Gopher.  Their argument, in brief, is that the predominant flake type in Qesem Cave is of the long, narrow type, which they choose to see as blades, and thus indicative of modern human abilities.

Here’s how the story goes. At some time in the Middle Palaeolithic Hominina began deliberately preparing largish lumps of rock by removing numerous flakes in just the right places with the aim of producing a final flake of a predetermined shape. This technique bears the name Levallois. Usually the final flake is referred to as a generic ‘Levallois flake,’ a Levallois ‘point,’ or a Levallois ‘blade,’ because archaeologists recognize these shapes as shapes that Hominina have used for about the past 40 to 50 kyr.
The following animation demonstrates an idealized version of the Levallois technique. Just click on the pic and press escape to get back to my elegant prose.
The problem with such idealized illustrations is that they tend to blur, if not obscure, the true nature of variability ‘in the wild.’ In addition to the flakes, François Bordes, whose work defined the Middle Palaeolithic for decades, recognized 14 (!) different ‘types’ of Levallois cores–which is what’s left after the desired flake is removed–each based on what he decided were mutually exclusive and distinctive flake products. Of the 14 only a few are generally employed by archaeologists as descriptive categories: the ‘flake,’ the ‘point,’ and the ‘blade’ tend to be the focus of attention.
My friends, Iain Davidson and Bill Noble have previously attempted to convince the lithic analysts of the world that there may be something wrong with the way they’re looking at the Levallois technique. First of all, they argue, there’s no good reason to think that the core or the flake were the desired end product. They call this the ‘finished artifact fallacy.’ They might well have called it the finished artifact fantasy! So, since they didn’t, I will.
The finished artifact fantasy presumes that because similarly worked pieces of stone come to rest in archaeological sites this must be evidence that they were an important, if not the most important part of the process. Try claiming the same for the discarded pop top from an aluminum beer can! The plausible reason for the broad similarities among the so-called Levallois cores, say Davidson and Noble, is that they represent a failed attempt to rejuvenate the core. If they’d succeeded, as they must have done often enough to make it a part of their repertoire for at least a quarter of a million years, there’d be nothing left to resemble the Levallois core that we do find here and there.
A similar theoretical stance underpins the work of Harold Dibble, who showed us that Bordes’s 50+ Middle Palaeolithic artifact types are merely arbitrary points along a continuum of lithic reduction. This leaves the MP with a core and flake technology which, but for the addition of retouch, began at least two million years earlier.
Of course, if one persists in believing that the final flake was the object from the start, the Levallois core becomes de facto evidence of what the French refer to as très pensées, the thoroughly-thought-out sequence of numerous flake removals that is undertaken to achieve the pinnacle of Middle Palaeolithic flint-knapping–the Flake. And, if you’re sensible, and realize that the Levallois ‘technique’ is nothing more than a flake-tool-oriented continuous reduction process… Well, you get where I’m going with this. Aside from its being a senseless waste of precious raw material, there’s nothing admirable or artful about the flakes we see when we are shown more than the ‘typical’ examples usually portrayed in publications.
Before I get to the Qesem Cave claims, I need to prime you by showing you how specious is the claim that Levallois cores are in any way typeable. But you don’t have to simply take my word for it! Believe your own eyes. In the following I use numerous examples of the Levallois cores excavated from Douara Cave in Syria. I’ve collected like-named specimens from a variety of the published figures showing examples of cores, with the aim of showing you the variability WITHIN something called a ‘type’ of Levallois core.
First, the ‘discoidal’ cores, so named because when viewed in plan, the outline is disc shaped. Except, of course, when it’s not, as in the first example in this matrix of line drawings taken from Akazawa 1974. Click on the images to embiggen them. 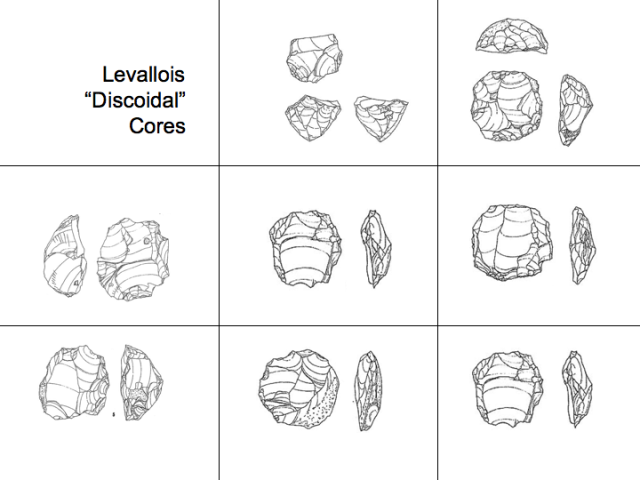 Next up are the ‘prismatic’ cores. These display several sub-parallel flake scars on the dorsal surface, which when viewed end-on resemble, to a degree, the angled sides of a prism. Some considerable variability here, too. 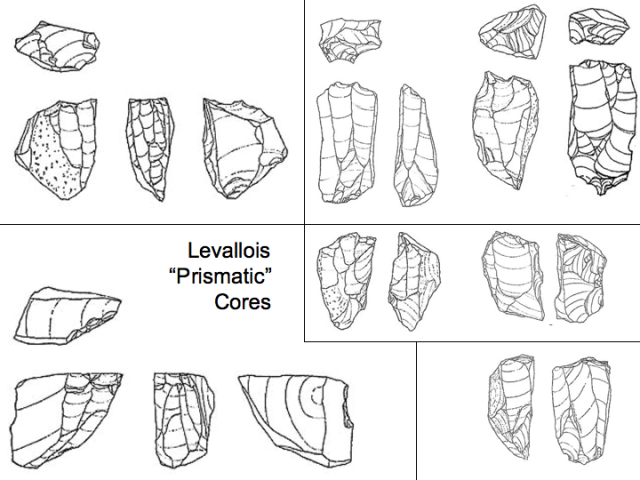 Next, the generic ‘flake’ core. Nothing about the core is terribly interesting, nor is the vaguely named Levallois flake itself, which is an uninteresting shape–i.e. thoroughly uninteresting: not at all pointy or blade-like (i.e. recognizable as something you or I might be capable of making). Here you’ll notice just how seemingly  random is the shape of the final flake scar (and thus the shape of the final flake), which ranges from almost rectangular to almost blade-like, and from a regular flake to an outrepassé. To suggest that there’s any uniformity to the shape of these cores, or the presumptively desired end product is to see the world in a grain of sand–it takes a LOT of imagination.

Next up, the much-vaunted Levallois ‘point’ core. The pointy Levallois flakes are said to have been hafted, another claim that reinforces the (almost certainly erroneous) idea that Middle Palaeolithic Hominina were like us. Apparently there were fewer ‘point’ cores at Douara Cave than the other types. Even so, all but one of these fails to impres if the final flake was intended to have been at all point-like.

Lastly, and most relevant to the claims of Shimelmitz, Barkai, and Gopher, is the ‘blade’ core. Here is the entire sample of illustrated ‘blade’ cores from Douara Cave. Far be it for me to cast aspersions on someone else’s appraisal of a lithic assemblage. But I’m pretty sure you’ll agree that there’s only one thing uniform about the blades taken off these cores–they’re (almost always) twice as long as they are wide and (often) there are one or two (broadly speaking) similarly shaped flakes removed on either side of the dorsal ridge.

So, it would seem that there’s reason to be suspicious of any claim to the effect that (among others) the Neanderthals were chipping away for minutes on end to acquire a perfectly shaped flake at the end.
At the outset I was prepared to be charitable to the Qesem Cave archaeologists with respect to their claims. However, upon looking more closely at their paper, I notice vanishingly few illustrations of actual cores and flakes, and instead find schematic drawings and replicated core-reduction products.
Preposterous would probably be an apt epithet to use for their claims, but professional courtesy forces me to tone it down a bit and say only that inferring a systematic ‘blade’ production system from what was unearthed from Qesem Cave is, at best, a bit of a reach.
Let’s have a look, shall we? First up, all of the lovely colored images are of the authors’ replicated example of what they claim is the Qesem Cave ‘systematic blade production’ technology. Note that the only image of a real example is the line drawing in the middle. Also keep in mind that this would have been the best archaeological example they could come up with to illustrate their point. I don’t know about you. But I don’t see much in the way of blade-shaped flake scars on the archaeological example.

The next graphic is a similar story–talented modern humans replicating what they think Middle Palaeolithic Hominina were accomplishing. Notice, again, that the only archaeological example is hardly impressive, and it’s more than a little difficult to see where any blade-like flakes came off this core. Nothing, that is, like the beautifully fashioned, replicated version that takes prominence in the figure. 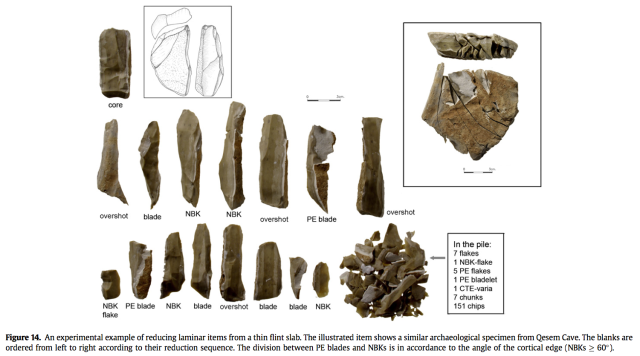 Again, I’m looking at the drawings below and I’m not seein’ much in the way of ‘systematic’ anything. 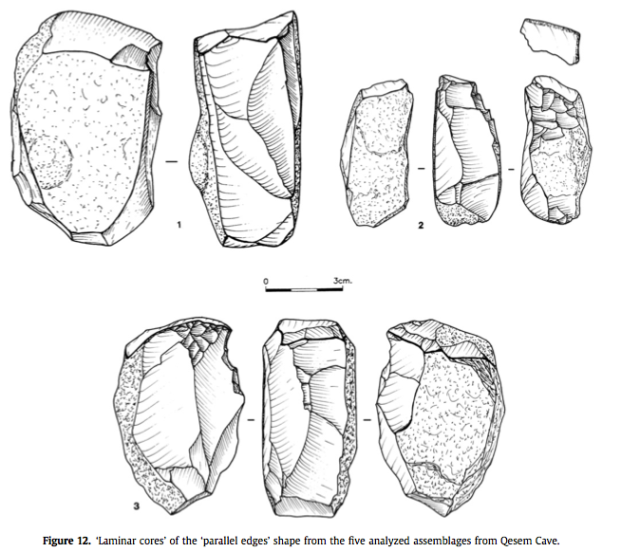 More of the same follows. Lithic analysts! Tell me what you think.

These are beauties! Where did they find them. They certainly didn’t come from any of the cores they illustrated.

These ‘blades’ and the ones below are just what we’re used to seeing in the MP. No self-respecting modern human would be preparing a blade core only to be removing blades with cortex on them. And (pardon the expression) Poop! Look at the cross sections. These are like small totem poles, not blades!

I don’t even feel the need to summarize what I’ve said tonight about what the global media thinks is a pretty Fabbo discovery. If they only knew. Yeeee-haaaaa!
Sorry this turned out to be so long. These things take time. And I’ve rushed. Somebody, please, take the lead in disabusing these people of their fantasies!