Wow! I’m gonna go out on a limb and say that Gary Haynes might have a thought or two about yesterday’s news in Science, the publication of the American Association for the Advancement of Science, which trumpets [ouch] the claim that a tiny sliver of mastodon bone imbedded in another mastodon’s rib head was the work of human hunters. I don’t dispute the fact that humans were in the Americas that long ago. I don’t dispute the likelihood that they hunted these beasts. However, the authors have failed to rule out natural causes and that leaves me skeptical. Here is one of the official images from the Science article. Look at the scale. It’s an impressively small fragment of bone. More on this in a later post. I’m hoping Gary’ll chime in. Better him than me, simply because he’s the one that literally wrote the book about present-day elephant behaviour and how it informs us about the fossil record. 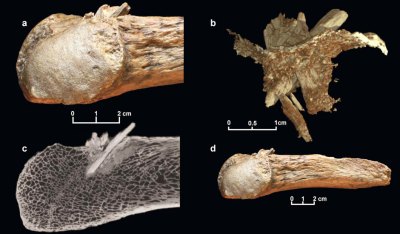