D’abord, as the French would say, I must give credit to the author of “The finished artifact fallacy,” Iain Davidson, whom I’ve mentioned in several posts before now. I first met Iain shortly after the simultaneous publication of my Honours essay, “Grave Shortcomings: The Evidence for Neandertal Burial,” and his and Bill Noble’s “The Archaeology of Perception: Traces of Depiction and Language” in the April 1989 issue of Current Anthropology. 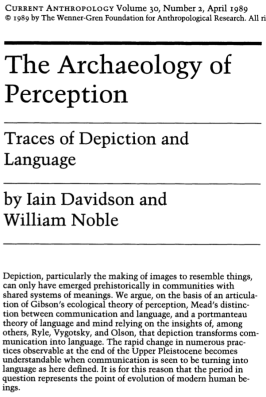 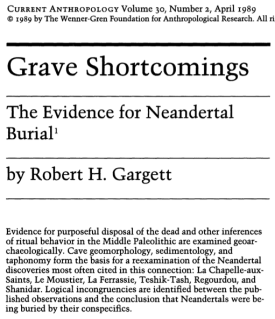 For the three of us it’s always seemed like magic that neither I nor they had any inkling of the other’s work, that the papers espoused much the same radical conclusion while using different sources of evidence, and that they were published simultaneously. Funny ol’ world.
This post might as well be written by the two of us, because Iain first floated the idea publicly in 2002, but we had been fellow travellers on this matter since the late 1980s, while remaining for the most part invisible to the larger archaeological community. If I have misspoken in claiming co-ownership of these ideas, and Iain is uniquely responsible, may I be forever banished to the margins of academia. [No irony intended. Honest!]
In “The finished artefact fallacy,” Iain laid out, in exquisite simplicity, and with abundant empirical evidence, the thesis that the ‘handaxe’ was never the intended end product, but was instead just a core.
In my earlier post on the ‘handaxe’ I widened the discussion to include the other named ‘types’ of core that accompanied that of the ‘handaxe,’ which only goes to show that Iain’s First Principle of the Finished Artefact Fallacy (FAF) was indisputable:

In choosing materials for analysis, archaeologists sometimes unwittingly bias their analysis towards the observation of patterning. It is a fallacy to attribute intentions to the knappers3 on the basis of patterning that results principally from the selections made by archaeologists

This is what I was trying to illustrate with my earlier post on the ‘handaxe’ matter. Although Iain’s FAF article was primarily levelled at the ‘handaxe,’ he paused long enough to bring the Levallois technique into the discussion:

[The Levallois technique purportedly] involved the removal of flakes from a core with an intention of setting up a final stage of knapping for the removal of a distinctive final flake, the shape of which had been envisaged from the start of knapping. … [T]he technique was present at the earliest sites of Olduvai Gorge … 1.8 million years ago, with one distinctive difference—the final flake was not removed. There are some sites where the cores were abandoned together with the ‘final’ flake, which is definitive evidence that there was no initial intention to produce a final flake of predetermined form (ibid. 182).

As I’ve said before, I’m not a flint-knapper (IANAFK), but it has always seemed to me a little…odd…that the Levallois technicians spent sooooo much time whacking away at a beautiful block of microcrystalline flint, literally despoiling it by essentially wasting heaps of raw material just to produce an object of a certain shape, when a modern human could easily have achieved exactly the same result with almost any of the flakes produced, just by choosing one with the appropriate characteristics, and retouching it with the object in mind of producing an artifact with a particular form.

Of course, my assessment of the Levallois technique was, in private, called ethnocentric, bigoted, and one or two other choice epithets. Today, I hope I can be forgiven for, once again, trotting out my take on the Levallois technique, which differs from Davidson’s in a similar way that it does where the handaxe is concerned: I qualitatively examine the mental gymnastics behind the First Principle of the FAF, given above.
Despite what some may think I do not write this stuff in my pajamas in the basement of my mother’s house, as detractors so often portray the stance of a blogger. I want you to know that I’m wearing ‘sweats,’ and, while I do live in a basement, it’s not my mother’s! In fact I’ve presented my Levallois counter-arguments in public, in an invited paper presented before an audience of eminent archaeologists of the Middle Palaeolithic, at the Cradle of Language Conference, in Stellenbosch, in 2006. Regardless, whether I’m blogging or invited to give a scholarly paper, if I may quote from “Derek and Clive Live,” “[wh]o tooʔ any noʔice? [Effing] nobody tooʔ noʔice!”*
But I’m not bitter.
Onward to the past, and the Levallois. François Bordes was a pioneer on so many levels that it’s a shame it’s turned out that he was fundamentally mistaken about what he saw as the end products of Middle Palaeolithic flint-knappers. It’s also a testament to his imagination that he could see as likely anything so difficult as banging away at a block of stone trying to end up at a point where you could blast off a flake of just the right proportions. I would love to have $5 for every time he, or Eric Boëda, or anyone else for that matter have thought they were there, only to be thwarted by a flaw in the stone or a mis-timed blow. Well, at least they had plenty of Levallois cores to show for it! I’ll leave the story here for the moment, to give you the opportunity to do something else besides listen to me.
But I’ll toss in a final teaser. The following illustration is my montage of the Levallois core classification that Bordes published in 1980. I’ve collected their images and labelled them according to my English translation of his original French. [Nobody seems to want to play this game…but] Ten points to the one who correctly guesses what I’m going to say in my next post on this issue!

*The ʔ is phonetic-speak for the glottal stop–the sound that most North Americans would recognize as the middle sound in the casual pronuciation of, for example, ‘mittens.’ [Can’t you tell that I love this stuff?]