We’ve all heard the expression: If you dressed a Neanderthal in a suit and tie and put a hat on him, he wouldn’t stand out on the New York Subway. I beg to differ. At left is what I consider to be a pretty good “back of the napkin” rendition of the Neanderthal face based on a so-called facial reconstruction from the Australian Museum. I’ve been having a close look at a bunch of “artist’s conceptions” of what the Neanderthals looked like. And I think that they are uniform in depicting the face in a very charitable fashion, to the extent that they always misrepresent the nose and eyes.

The Aussie Museum’s original is reproduced at right. Using this original I mirrored both halves to arrive at versions with and without fleshy bits. Contrast the fleshy Australian Museum Neanderthal with the skeletal one. Notice that the outside of the fleshy nose would fit inside the nasal aperture of the skeleton. And look at the eyeballs in comparison to the skelton’s orbits! It’s truly laughable how small the artist’s eyeballs are compared to the size of the skeleton’s eye-holes. I think we’re being had.

Now compare the Australian Museum’s and my attempt to depict the nose and eyeballs in a manner more in keeping with the real Neanderthal’s skeleton. Quite a difference. I have to think that the realistic Neanderthal would stand out like the proverbial sore thumb. Don’t you? 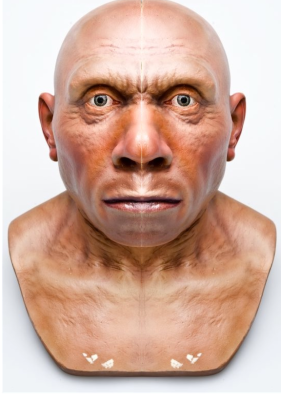 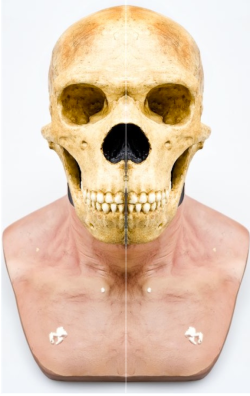 Right now I don’t have time to go into why we’ve been misled in this fashion. But I think you can probably make an educated guess.

You’ll be seeing and hearing much more about the Neanderthal face in the near future. Stay tuned.