In keeping with my previous post, I’ll attempt to flesh out [cough] a similar argument with respect to the side view of the Neanderthals that we’re used to seeing in so-called artist’s conceptions or facial reconstructions.  First of all, have a look at the Australian Museum’s attempt from the side. The black outline is the silhouette of the fleshy side. Notice how the bridge of the fleshy nose thins out as it gets to the tip of the nasal bone and follows on from that to approximate a nose such as you or I might see on a modern human with an unfortunately big nose, like that of famous anthropologist Milford Wolpoff. 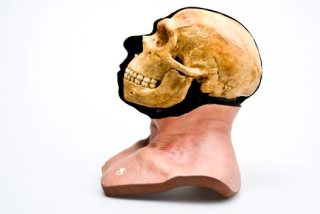 But wait! What happens if you take account of the nasal cartilage, which in mammals conforms to the line described by the articulation of the right and left nasal bones. 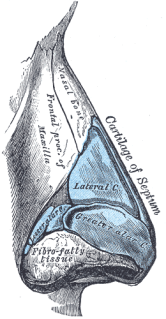 It’s easier to imagine if you have a model to work from. In the illustration on the right from Gray’s anatomy, you see the Cartilage of Septum and the Lateral Cartilage begin at the end of the nasal bones and form most of the nose’s bridge. The Greater Alar Cartilage is what gives our nose its ‘flare.’ The Oz Museum has ingnored the cartilage altogether, as if it didn’t exist, with the result that they can fudge the angle of the bridge. If you think about where the cartilage would articulate, and its likely length (i.e. at least as long as the nasal bone), you can see that the Neanderthal nose would be a prodigious honker, at a minimum.

Many of the Neanderthal skulls that we’ve seen pictures of include reconstructed (read ‘imagineered’) nasal bones. The real ones are relatively fragile and are easily removed by any number of post-mortem processes. For example, look at where the nasal bones would be on Shanidar 1, shown above, and the model from the Australian Museum seem to have nasal bones that would not be out of place on a large-nosed modern human. BUT THEY’RE NOT REAL! They’re plaster fantasies put there by the excavator or the anatomist/physical anthropologist who ‘described’ them in the scholarly literature. And, thus, whether the result of a ‘facial reconstruction,’ an artist’s conception, or just the audience’s imagination, the Neanderthal is made out to look more like one of us than it ever could have in reality.

Now check out the lines made by the nasal bones in the Shanidar 5 specimen, one of the few with the nasal bones intact, and those of the modern human on the right. The Neanderthal’s is almost horizontal, while the modern human’s dips about 45 degrees from the horizontal.
Now gaze at the two views of the nasal anatomy, below, which I’ve oriented according to the plane of the nasal bones in the Neanderthal nose on the left and ours on the right. Are you getting the picture? [Gad, I wish I had PhotoShop and knew how to use it! Never mind.] Unless you think that the Greater Alar Cartilage suddenly became the Greater Alar plus garage-door-effect Cartilage, you’ve got an almost vertical naris (the hole you breathe throught). The result would be that if you were to see a Neanderthal on the New York subway it would look anything but usual. It’s a radically different Neanderthal face that I’m suggesting, one that’s likely to be much more realistic than any that you or I have seen before. And, I suggest, it all has to do with carnivory. 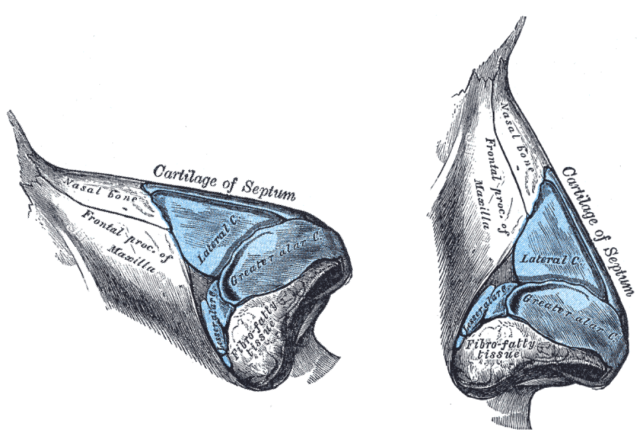