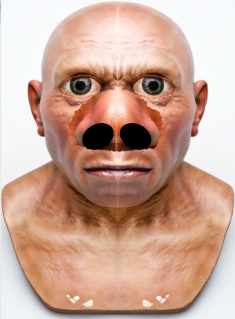 Relative to my previous posts* on the subject of the Neanderthal face, I’ve had an epiphany in the last couple of days. So, I thought I’d do a wee comparison between a modern day “top” carnivore and our cousin’s, the Neanderthal, face. Do you see what I see in the image below? It looks as if the felid and the Neanderthal face have more in common than either has with the modern human.

The lion has a keen sense of smell. Which of the bipedal cousins do you think has the better sense of smell? Relative to the rest of the face, the big cat has a nasal aperture that’s equivalent in size to that of the Neanderthal. Not so that of the modern-day hominid on the right.
A cat can spot its prey from 3 km away. Can you? Do you think the Neanderthal could?
The cat has dagger-like fangs and molar teeth that would put a deli meat-slicer to shame. “Aha!” you might say, “that chap from Forbes quarry couldn’t be as effective as the lion–it doesn’t have the appropriate dental accoutrements!” Umm. It’s possible, isn’t it, that all those flint flakes lying about came in handy for more than whittling?

To my (admittedly impoverished compared to a carnivore’s) eyes, it’s as clear as the nose on your face day that the Neanderthal was well adapted to carnivory.
I’ve been accused before now of beating a dead horse. Is the “Neanderthals-are-just-like-us” horse dead yet?
* Those earlier posts

One thought on “Face It! Neanderthals Were Adapted to Carnivory”