In July 2011 I travelled to the Czech Republic for the second time. The first was the summer of ’92. I was in grad school at the time, and I’d been looking for material for a thesis topic that required palaeontological animal bone excavated and documented with archaeological precision. Dr. Karel Valoch of the Moravian Museum was the only one of my contacts with access to material that satisfied my criteria, and very kindly invited me to examine the assemblage of cave bear bones that, in the 1950s, he and Professor Rodolf Musil had excavated from Pod hradem cave. Pod hradem lies in the Moravian Karst (Moravske Kras), a carbonate massif in eastern Czechia with, at last count, over 2000 individual caves, many of which are manifold and ramified. Pod hradem is not one of those.

Early in 2011 Masaryk University’s Dr. Ladislav Nejman invited me to visit during renewed excavations at Pod hradem, aimed at fleshing out the paleoecological picture of the last 30,000 years or so in that part of Central Europe.
I had some very powerful personal reasons for travelling there. I was finally going to see the cave that yielded the collection of animal bones I used for my Ph.D. dissertation.* I knew that I would meet Dr. Karel Valoch again after 19 years, who was now 92. Finally, I would again be able to see the family that befriended me in 1992, the same family that nursed me after a classic dissertation fieldwork illness, and which, to my shame, I’d more or less allowed to think I’d fallen off the edge of the Earth.

Given the choice, I decided not to stay in Brno, the nearest big city, and instead found lodging within about 100 m of the cave, near a small tourist centre called Skalní mlýn, which once boasted a water-wheel mill, and which now hosts hundreds of thousands of tourists a year. The main attractions in this mini-resort are a river cave tour and views of the deepest gorge in Europe. Pod hradem is a relatively small void in the carbonate rock, but it looks across the narrow valley at Punkevni cave where it disgorges the Punkva river from one of its passages. The underground system is part of the system that created the Macocha Abyss, 138 m deep, formed when the ceiling of the cave collapsed. It’s the deepest such topographical feature in all Europe.
Skalní mlýn and Punkevny cave have been hosting tourists since long before the breakup of the Soviet bloc. However, good old-fashioned entrepreneurs have tarted it up a bit. There was a miniature train on wheels 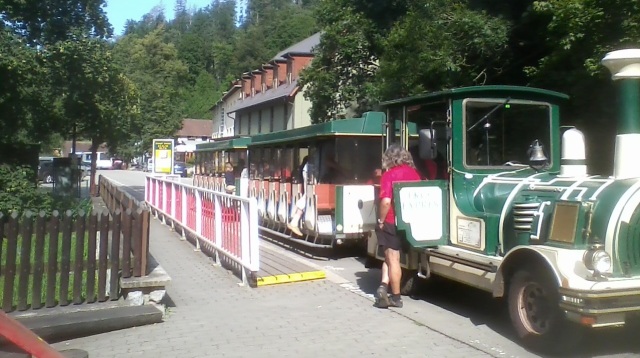 and a gondola to the summit of the massif.

There was an expensive hotel with a restaurant, with a few souvenir shops nearby, a couple of walk-up food bars, and two (!) pay toilets.

I’ll say more about the 2011 Pod hradem project and about my visit with Dr. Valoch and others in another post. For now, I gots ta go ta work!
* ‘Taphonomy and Spatial Analysis of a Cave Bear (Ursus spelaeus) Fauna from Pod Hradem Cave, Czech Republic: Implications for the Archaeology of Modern Human Origins.’ [I can proudly state that said dissertation became a book that you might just be lucky enough to find in your library. It’s been out of print for years.]