Chalk up another one for PLoS ONE ! From John Hawks‘s blog today comes news of this hair-raisingly un-empirical beauty, ‘Presumed Symbolic Use of Diurnal Raptors by Neanderthals,’ by Eugène Morin and Véronique Laroulandie. This is another one of those rapid publications that might have benefitted from a bit more time with the referees. The authors claim that one of the Combe Grenal (Dordogne, France) Neanderthals purposefully removed the talon sheath from an eagle’s terminal phalanx to aid in some sort of symbolic activity.
[!]

A single [that’s right, one only] eagle third phalanx from Combe Grenal, in France [Harold, are you responsible for this unique and important discovery?] is described in this manner:

This well-preserved specimen bears on its proximo-dorsal side two incisions produced by a stone tool. These incisions closely coincide with the proximal margin of the keratinous sheath overlying the terminal phalanx of the digit, which suggests removal of the claw sheath … . The absence of other parts of raptors in this layer and the fact that bird claws are predominantly made of a tough fibrous protein called β-keratin … point to a non-alimentary use of an eagle claw.

And here is the magnificent specimen, direct to you from PLoS ONE. 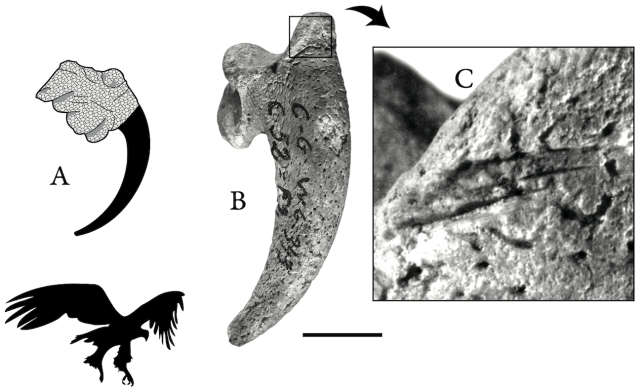 The scale bar refers to the complete phalanx and is 1 cm long. That puts the cutmark at about .25 mm across. Clearly, something extremely sharp made these incisions. Unfortunately the illustration isn’t of sufficient resolution to make out any diagnostic stone-tool marks. So, we are left to take the authors’ word for it that these are unequivocally the marks of a hominid-wielded stone chip. I strongly doubt their inference, and not just because these are such tiny cuts. Oh, the authors do report two other similar occurrences from Les Fieux. Same story. Same conclusions.
I know it seems pedantic of me, but would it have been too hard to examine a few living raptor terminal phalanges to see if, perhaps, the habitual grooming behaviours of such animals could leave such marks, on occasion, near the proximal margin of the keratinous sheath? Raptors use their beaks for grooming, and a beak is a rather sturdy structure, and, one would have thought, a very sharp implement that could, no doubt, quite easily put a scratch or two in the relatively porous bone of the terminal phalanx, which almost always gets bits of brain and fur stuck to it during the raptoring part of a raptor’s feeding episode.
I’m not sure that a geneticist could be expected to act as an authoritative critic of difficult to interpret archaeological materials, so I’ll let John Hawks off the hook on this one. However, he does go further and cites another study of modification to bird bone, published in PNAS [another turkey with Erik Trinkaus acting as editor], in which the authors aver hominid modification, again in the form of fine, v-shaped incisions on the bone [more often the effect of carnivore or other attentions], and other markings that convinced them of some form of symbolically mediated preference for wing bones. If anyone wants me to take that one apart, I will. But first, I want someone with an ounce of sense to start refereeing these turkeys.
These authors have provided us with not a whiff of empirical evidence beyond an assertion that these marks had to have been made by stone tools. Give me a[nother] break.
I hope I needn’t go further into the matter and discuss the merits of their fanciful conclusion based on the weakly supported inference that these were stone tool cutmarks. I’ll spare you my feelings on their assertions of symbolism.