Because I’ve been absent from pixel-land for almost a week, I’ve decided to combine what I was working on before I travelled to Vancouver with Touchstone Thursday. This will entail bringing to your attention not works that have stood the test of time, but rather some recent and fairly recent publications that may very well turn out to be classics in their own right, for any number of reasons. It began with a challenge–to bend my brain in the direction of an issue that’s currently being debated and for which there’s some very up-to-the-minute work that may well be a game breaker in a long-elusive geological and archaeological question.
You’ll never guess what the issue is. Go on. Give it a try. Hint: it’s not, strictly speaking, an archaeological issue.

Alex Trebek [from the podium, as serious and sincere as ever, considering that there are thousands of dollars at stake and millions watching and waiting for the day’s champion to make it a clean sweep]:

Bob [smiling sheepishly, knowing that he’s nailed it, ’cause he told them on his application that he was a writer of children’s books instead of text books.*]:

“Uh. What are megafaunal extinctions in North America, Alex?”

[Sound of jackpots being hit, just like in Vegas]

Yup. That’s it. Megafaunal extinctions. Thanks, Dave-oh! Couldn’t have given me low hanging fruit for a change? Could you? Hey, Sysiphus! Wanna gimme a hand?
Here’s the crux. It’s my belief that there are only two issues in archaeology and palaeoanthropology that are more hotly debated than megafaunal extinctions: 1) ‘Whose hominid is going to end up being the last common ancestor?’ and 2) ‘Are Neanderthals like us?’ [and all that entails]. Even the question of who came first to North America–the Clovis people or the Clovis people who weren’t yet Clovis people–pales by comparison to the three questions above.
So, what could I possibly [and I mean it] contribute to the decades-long ‘conversation’ about North America’s geologically recent mass die-off? What, indeed? Perhaps we’ll see. To begin with, I’ll have to set the scene in a way that’s not normally done, by modeling the broad environmental conditions south of the Pleistocene glaciers and what implications they would have had for the earliest human occupations.
Okay… Well… Here goes… First slide, please. Oops. Sorry! I have the remote! Heh, heh, heh.
Some of this will be review for the older students, so bear with your younger colleagues and meet me down around RanchoLaBrean or thereabouts.

All righty. The map above shows the more-or-less official maximum extent of the North American ice sheet at about the time the last deglaciation commenced. This vast accumulation of snow and ice was in fact the coalescence of two great ice sheets: the Laurentide (centred on what’s now Hudson Bay) and the Cordilleran (aligned with and mantling everything to the left and right of the Rocky Mountains down to about the elevation of the Canadian prairies). To the northwest of the ice sheet lay Beringia–that continental-scale landmass between Asia and North America that comprised a biome that’s been called the Mammoth Steppe [it’s always been termed the ‘Bering Land Bridge,’ but that really obfuscates the reality–it was about 1000 km from north to south. Thus, hardly a ‘bridge’]. Beringia hosted lots of big hairy elephants and other big, most likely hairy, quadrupeds. Directly south of the ice sheet, the Prairies. To the southwest, the Rockies, the Inter-montane Plateau and the Coast Ranges. To the southeast, Appalachia, the Piedmont and the Coastal Plain. For some distance to the south of this ice mass, from the Pacific to the Atlantic coast, periglacial (permafrost) conditions would have been the norm.

And what would this mean old periglacial environment look like? Millions of square miles of this when it’s cold out.
And a lot of this when the ‘summer’ arrives.
Or this
This was not a hospitable landscape.
And, when you consider that the combined seasonal meltwaters along the middle third of the ice sheet drained into what’s today the gigantic narrowing geographic funnel that is the Mississippi/Missouri River catchment, which narrows southward and becomes the Mississippi River Valley, you can probably imagine the ‘downstream’ extent of the landscape you see in the above illustrations. If you also include the summer runoff from the Rockies via the Arkansas River, you have an enormous affected area. Think of it, the Mississippi River is in reality a misfit (or underfit) stream.
This periglacial environment I’m talking about would have involved much or all of the states of Washington, Oregon, Idaho, Montana, the Dakotas, Nebraska, Iowa, Illinois, Indiana, Ohio, Kentucky, Missouri, Mississippi, Louisiana, Tennessee,West Virginia, Virginia, Pennsylvania, New Jersey, Maryland, and Delaware. 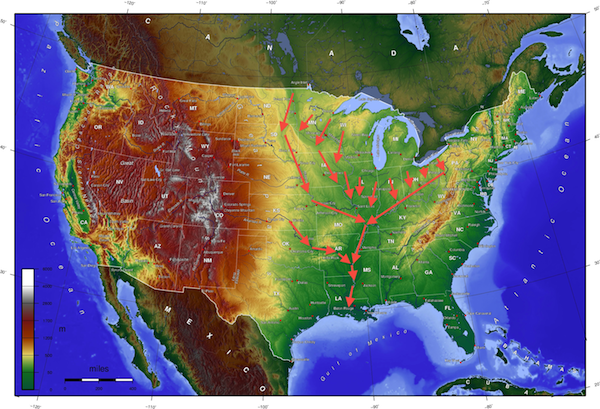 You can see the affected area better in the map above. I’ve drawn in the red arrows to show the approximate route of the seasonal glacial meltwaters. Remember those desolate outwash plain pictures up above? That’s right. All but the uplands in the middle third of the lower 48 would have looked like the wetter of the two much of the time.
So, what can I possibly contribute to the question of when and where the Clovis people became the Clovis people? I think it’s clear that it wasn’t within several hundred kilometres of the ice sheet’s southern margin at 15,000 BP, and not so much in what I’d call ‘The Great Outwash Plain of the Americas’ as long as that area functioned as such, which would have been the case in the first several hundred to a couple of thousand years after the last glacial maximum.
‘But what about the megafauna?’ ask the smaller children at the front. ‘You promised you were gonna talk about the big, scary animals!’
Okay, okay. Listen up, kids. Here’s a picture of one of the Pleistocene faunal communities south of the ice sheets, near Rancho LaBrea, in the western United States. And, yes, those are horses. There were camels, too. Both extirpated during this extinction ‘event.’ The big question has always been ‘Why?’

The explanation has boiled down to two mostly mutually exclusive schools of thought–either it was the climate changes that accompanied the end of the Pleistocene, or the gluttony of the newly arrived people that occupied this vast new territory at the end of the Pleistocene. ‘Debate’ has raged for decades. But lately there’s been a third candidate to explain the die-off: a so-called near-earth object (NEO) that scorched the western U.S. as it ignited the atmosphere and either broke up or ended up in the ocean.
[If this feels like déjà vu to many of you…yes, a similar set of positions characterized the debate about the dinosaur die-off at the end of the Cretaceous. Odder, still, it played out mostly in the pages of PNAS, too. Hmmm…]
So, let’s meet the players. In this corner, a heavyweight in the area of megafaunal extinctions: C. Vance Haynes, Jr. and a moderate-sized group of naysayers. In the other corner, a growing number of scientists of various stripes, all of whom are claiming to have found ‘smoking gun’ evidence of a near collision between a NEO and our Earth that scarred the contiguous United States, southern Canada, and central Mexico, around 12,900 years ago.

This controversy seemed to have grown legs just about the time Haynes–one of the most peripatetic and prolific geoarchaeologists on the planet–correlated the so-called ‘black mats’ that occur in numerous geological and archaeological localities with which he was familiar from his extensive fieldwork in North America. The ‘black mat’ sites are shown as filled black circles on the map above, taken from Haynes (2008). Notice the paucity of circles of any kind in the Great Outwash Plain of the Americas? Coincidence? Don’t think so.
Back to the black mats. It turns out that these charcoal-rich layers are all about 12,900 years old (Haynes 2008), and found across western North America and putatively in the extremely interesting geological features on the eastern coastal plain–the so-called Carolina Bays [which resemble nothing so much as titanic-sized rain-drop scars from a hard, slanting downpour]. The black mats, therefore, are a continent-wide coincidence that begs for an explanation. Not the first to consider the possibility of an extra-terrestrial object, nevertheless Haynes concludes that, while there might well be a connection to cosmic collision, more work needs to be done. He said a mouthful there.
In the next part of my challenge, I’ll examine:

2 thoughts on “A Clairvoyant’s Touchstone Thursday: Nanodiamonds are a Sabertoothed Cat’s Worst Enemy”