Here’s a real beaut of a story that brings to mind any number of aphorisms to remind the arrogant of their essential hypocrisy. ‘The pot calling the kettle black’ comes to mind. As does the epigram I’ve bent to my own uses in this blurt’s title, ‘People who live in glass houses should not throw stones.’

It seems that Turkey, last remnant of the once great Ottoman Empire–the longest lived in history–is turning its gaze outward and flexing its nationalistic muscle in the hope of reclaiming some of its splendid ex-pat artifacts abiding in foreign climes, including the Altar of Zeus from the ancient Greek city of Pergamon (located in what’s Turkey today).

From Newsweek comes this:

The Turkish government has decided that it can score nationalist points by launching a vocal campaign to recover ancient Anatolian artifacts from foreign museums. Over the last year the Turkish Ministry of Culture and Tourism has resorted to ever-more aggressive measures, from threatening to suspend the excavation licenses of foreign archeological teams to blocking the export of museum exhibits. Last month, for instance, the ministry announced that it would not issue export licenses for several dozen museum pieces due to be displayed at the Metropolitan Museum of Art in New York, the British Museum, and the Victoria and Albert Museum in London. As a result, important exhibitions—Byzantium and Islam at the Met, The Hajj: Journey to the Heart of Islam at the British Museum, and The Ottomans at the V&A—have either had to scramble to find alternative artifacts in non-Turkish collections or delay the exhibitions altogether.

This, while inside Turkey they can’t even keep their own chickens from their own home-grown foxes.

Two employees have been reassigned allegedly in connection with a scandal in which the director of Istanbul’s Topkapı Palace Museum ordered a priceless throne to be carried off to his personal residence in June. The decision to reassign two employees, despite an ongoing investigation over the scandal, has raised concerns that the museum’s director is being shielded by the ministry (The Hurrieyet Daily News online).

All of which, to me, begs a huge question. Whose past is whose? The Altar of Zeus was built by the Greeks, who saw nothing wrong with colonizing Asia Minor in the centuries before the year 0 CE. The modern Turks have been something less than autonomous over the millennia. Should Turkey, simply by virtue of its unhappy past, be ‘allowed’ to claim the Altar of Zeus for its own?

If this blurt turns out to look and sound much more like a history lesson than a subversive approach to an archaeological question, please bear with me [I do say that a lot. Don’t I?] I think it’ll become clear that there’s nothing clear about who owns the past–at least not in this case [and I suspect, in most such cases]. My conclusion is that the Altar of Zeus should stay in Berlin. Perhaps it should be treated differently given its provenience. But stay there, it should.

The lands comprising today’s Turkey, as everyone probably knows, sit at the crossroads of continents, and were variously colonized or occupied by more classic, medieval, and more recent civilizations than I or anyone else could shake a stick at. Hattians, Hittites, Assyrians, Chaldea, Phrygians, Cimmerians, Lydia, Caria, Lycia, Achaemenid Persians, Greece, Rome and its successor, Byzantium (the rump remains of the Roman Empire).

By 1071 CE what’s now Turkey had been subsumed by the Great Seljuq Empire, which was a Sunni Muslim power marginal to the Great Caliphate, the Muslim empire against which Europe crusaded in the Middle Ages (Seen below). The Seljuqs ruled for about 300 years.

Their influence on religion in Turkey was profound and remains so to this day.

The pan-Asian Mongol empire was the last hegemonic power to which Turkey was a vassal prior to the indigenous rise of the Ottoman Empire. The Khans conquered all but a small portion of what’s now Turkey–only the extreme western part remained independent. The last Mongol ruler of Turkey will be well known to most of you–he was Kublai Khan, direct descendant of Genghis, the man who single-handedly invented world domination. Prior to the modern era, there was none that covered more territory.
The Ottoman Empire recouped the rest of modern Turkey in the waning years of the Khans, and, as you now know, the polity based in Constantinople endured into the 20th century. Following the war that ended no wars, the Ottoman Empire was divvied up in 1923. Here’s what became of the great Ottoman Empire after WWI.

You’d think that such a polyglot history would be acknowledged and embraced by the modern government of Turkey. You’d of course be wrong. Nothing is ever as it seems or as it seems reasonable to assume it should be [another fearless subversive aphorism, if you wanna know].

The palatial artifact  you see below is the Altar of Zeus that began this story, removed from the Greek acropolis at Pergamon. And Turkey wants it back. It was liberated by German archaeologists in the 19th century, after an agreement with the then government of Turkey. If you want to know just how prominent an artifact this was in the ancient city itself, check out the lithograph representation of the Acropolis at Pergamon in its heyday, immediately below the contemporary photo that shows its immensity [to say nothing of its Greek-ness]. 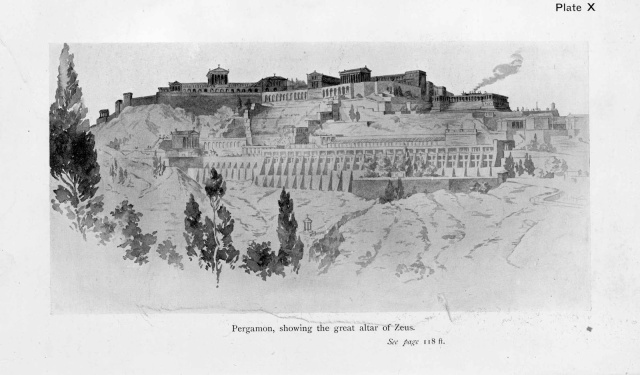 The Altar is the building that has the smoke drifting skyward from its roof.
In the case of the Altar of Zeus, who owns it is no trivial question. Do the modern Turks have any claim, natural or otherwise, to this trace of ancient times? Who are the modern Turks? You’d have to say that they’re culturally well removed from the inhabitants of that part of the world at 500 BCE. Did the ‘turks’ of that period look and act like the Greeks of that time? Probably. What about the Roman era? After a while, maybe. But maybe not. The Byzantine Empire (the eastern remnant of Rome) actually emulated classical Greek culture for a few hundred years. Does that give the modern Turkish people the right to the Altar of Zeus? Who are the ‘Turkish’ people?
I think you know what’s going on in Turkey when its present government plays ‘hardball’ with its past. They know that history’s an hourglass glued to the table, regardless of whose history we’re considering. Whose interests are being served by their intractability at this time in history? Certainly not the Past’s. This is not a question of who owns the past. This push to repatriate is not born of ethics, nor should it be decided on the contemporary notion of ethics. And, most importantly for you and me, this is not a question of archaeological ethics.  Notwithstanding the depredation that occurred in the first place, I’m fairly certain that the German museum takes its stewardship of the Altar of Zeus very seriously, and its integrity as an artifact is all but guaranteed.
So what’s all this about? And how do you solve the matter equitably? Well, for starters you don’t acquiesce to the Turkish demands. It’s curious that the Turks are concerned about their Greek antiquities. Given the very long history of antipathy between modern Greece and modern Turkey, you might think that the Turks would be happy to see ‘their’ Greek antiquities thrown in the dumpster.
Or is this about Turkey sticking it in the eye of Greece for political points? The modern-day Turkish government, nor the people it claims to represent have no claim, and no right to claim, that the Altar of Zeus belongs to the modern-day country of Turkey. Period. No more, as it happens, than the European occupiers of the Americas have any claim to the remains and the cultural treasures of the indigenous people that they’ve displaced.
As it happens, Germany, in this case, has a contractual arrangement that allows them to claim, legitimately, the artifact as their own. But that, too, is a historical artifact. Who’re you gonna call? Who owns the Altar of Zeus? Not I. Not you. Not Turkey. Not Greece. Not Germany (which, of the three, has the least logical claim, cultural or otherwise). What of the Mongols? The Sunni Muslims? The Persians?
I think you’d have to say that, under the circumstances, one could easily and justifiably claim that the Altar of Zeus is a part of the world’s heritage. Regardless of where it presently resides, at some level it belongs to all of us (as indeed do all of the works of humanity, going back into the Pleistocene). UNESCO could quite easily designate it to as such and in so doing be able to dictate the terms of its curation, and the member nations of the UN would be forced to abide by the rules as set forth in the UN Charter. I say, to Hell with ’em if they don’t like it. In the case of the Altar of Zeus the laws of ownership went out the door before the year dot.
The last thing I want to see any of the world’s governments do is pander to one government or one people to the detriment of the rest so that the government ‘playing hardball’ can profit from its transparently nationalist politics. In the end it boils down to this inalienable travesty–whoever owns the present owns the past. And if one government or another acquiesces to Turkey’s muscle-flexing, it’ll have more to do with maintaining ownership of the present than it has to do with who, rightfully, owns the past.
I think we should ignore the pants off Turkey.