Sure enough, another hand[soap]-axe has been discovered! The second of these beautiful implements has lately come to light, in this case raking morning sunlight. The palaeoanthropological community knows just what to make of it, too. As with it’s lithic counterparts, this must surely have been purposefully shaped by the hominid that resides with us here at Subversive Archaeologist world headquarters. 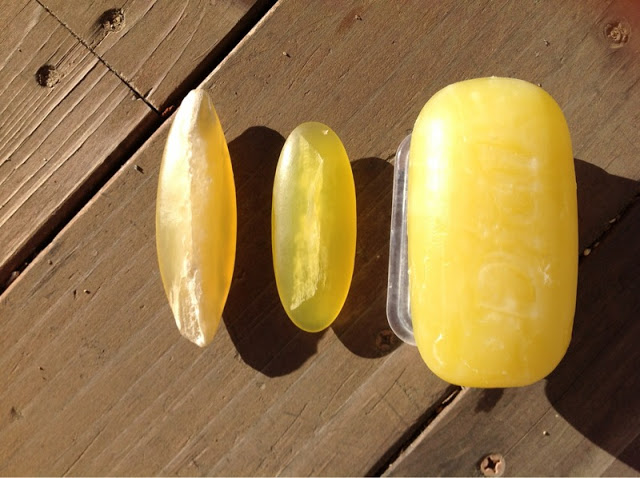 Yet, unlike the earlier discovery, pictured above, at left, this specimen is an exquisite ovoid. The ovoid is double-convex, like the first. Moreover the angle formed at the margins is identical to that of the elongated leaf-shaped original discovery? To the right in this photo is the form of raw material that occurs naturally in the vicinity. Given the clearly different outline, this latest hand[soap]-axe, assigned the label H[S]A-2 was likely used for a different function than that of H[S]A-1. Or, conversely, if there turns out to have been a temporal discontinuity between the two, it’s quite possible that the two performed the same function, but in different cultural systems. Either way, there’s no denying that the hominid soap shapers carried out an almost unbelievably complex series of attritional episodes (colloquially known as washing) in arriving at these forms. No other explanation could possibly exist for the existence of these nearly perfectly shaped pieces.
This ‘industry’ rivals the Levallois technique for its sheer virtuosity.