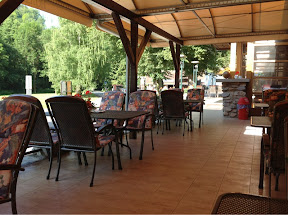 The crew will arrive in their nine-seater Mecedes van in about half an hour.
For the time being only one meter-square excavtion unit is being plumbed. Most, if not all of the excavated sediments are transported to the valley floor from the cave about 100 m up the cliff. A small team is tasked with wet seiving in the nearby Punkva River, frosty cold from its long underground journey through the Moravian karst. I and a couple of students are washing the faunal remains recovered in situ, and I’m pawing through the dried bulk samples. We work in the kitchen of a condemned building that was an outpost of the Czech Geological Survey. It’s about 100 m from where I’m sitting right now at the hotel. This photo was taken yesterday in the ‘lab. 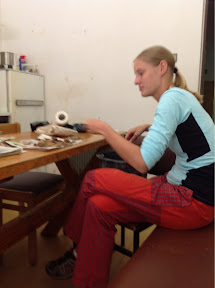 Pod hradem Cave has a very slight imprint of human activity, and through the first week and a half of the 2012 season not a one lithic artifact has been recovered. The crew are, understandably, a little hungry for something other than cave bear remains. I see what the excavators don’t, which usually includes foetal or neonate bits, and much carnivore-modified mature bear long-bone fragments. As was the case with the material recovered in the 1950s, with which I’m very familiar, that carnivore is almost certainly a large canid–one of the extra-large Pleistocene flavour.
Live, from the Skalní Mlýn Hotel, this is the subversive arrchaeologist.