I’ll get to talking about some of this year’s archaeological coolness after I effuse for a while about my temporary ‘office’ in one of the most beautiful areas in Europe. So, hang in there. 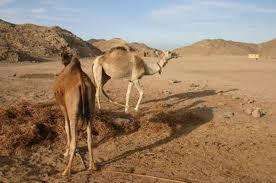 It’s Hump Day. And I’m officially half way through my 2012 field excursion at Pod Hradem Cave, which overlooks the Macocha Gorge in the Czech Republic, Europe’s deepest canyon, at 190 m. The gorge and over 2000 caves of various sizes occur in the Moravian Karst, a region of uplifted calcareous rock in the southeastern part of the CR. 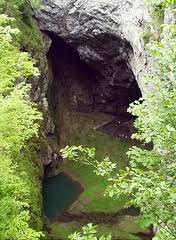 The area is well known among palaeoanthropologists for its Pleistocene cave deposits, and equally prized by rock climbers, spelunkers, speleologists, and just plain folk. 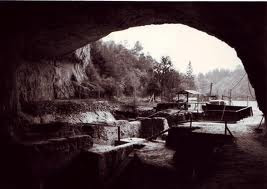 Since the late 19th century the Moravian caves have been exhaustively searched for clues about humanity’s early Central European experience. Localities such as Sloup and Pod hradem have provided hordes of information regarding palaeoenvironment, palaeobiology, and palaeontology, alongside the archaeological findings. 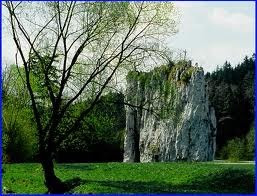 I’m not a rock climber, but I know some, and I have a close relataive who enjoys the activity. The Moravian Karst’s crags and crevices, free-standing formations and sheer precipices would, I think, keep all but the most jaded climbers happy for weeks, if not years. 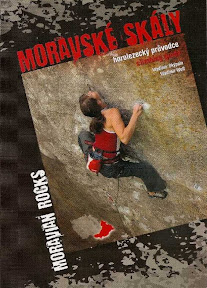 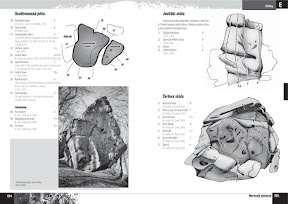 The Karst is also a place where you see the hallmark of all such geophysical bodies, disappearing watercourses, underground rivers, and cave voids with fantastic [in the true sense of the word] travertine formations, stalagmite and stalactites, and large areas of standing water. A hundred metres or so from Pod hradem Cave is the starting point for an underground river tour of the Punkva Cave, which transports you from the summer’s heat into the year-round cave environment–about 6 degrees Celsius and about 100 percent humidity. Take a jacket! At the midpoint it’s all ashore to view the Macocha Gorge from the bottom of the abyss. At most a tenth of the height of Colorado’s Grand Canyon, it’s still an impressive sight, whether you’re cantilevered out over it from the upper aerie near the Chata Macocha [my temporary residence], or at the bottom, breaking your neck to see the light at the top. 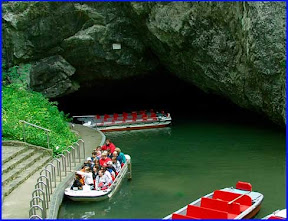 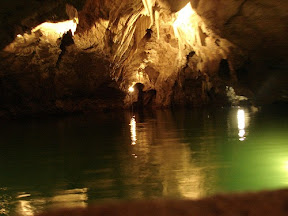 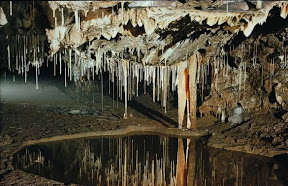 Most of you’ll remember that I take a cable car and a train to the field lab every work day, and Punkva Cave and its neighbour are both within about 100 m of the lower station, shown below in one of the many tourist ads to be found in shops and information kiosks all over this region. 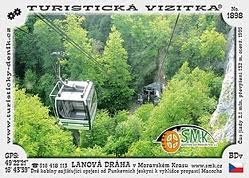 I hope your patience to this point will be repaid in some measure by the following archaeology talk. Keep in mind that thus far I’ve spent almost as much time with my Czech family than I have in the lab sorting the heavy fraction. However, some patterns have emerged that I think are really kewl.
2011 and 2012 have seen the first sediments from Pod hradem Cave that’ve been collected using 3-mm sieves. As such, I’m getting a really up-close look at the sorts of things that I never saw while I was examining the skeletal material excavated in the 1950s. For example, I’m finally seeing the degree to which everything skeletal has been comminuted in the trackway of the cave’s annual visitations by the ursine behemoth, the cave bear.
The cave’s entrance is only about 3 m wide and at most a couple high, and the wall and ceiling form an arch. So, history’s largest bear would have been constrained to a 1- to 2-m wide pathway over very-fine silt- and clay-sized particles containing [mostly] pebble-sized clasts of cave break-down products. The excavation is taking place at the point where the sloping entryway, which is also the day-lit area, gives way to the larger gallery that is mostly in darkness. It’s logical to think that any human visitors might have considered the area optimal. From a taphonomic point of view, this is still an area where the bears and other large mammals would likely have trodden. The upshot is that everything but the most robust skeletal elements has been reduced to cm-sized and smaller fragments. I’m seeing, in all likelihood, what’s left of the foetal/neonate vertebral bodies and mandibles. Most are a small portion of very thin cortical bone with barely visible cancellous tissue adhering on one side.
I’m also finding that there must be a lower size limit to the degree of comminution that a cave bear can produce in a soft substrate. The samples I’m seeing comprise those tiny fragments of very young bears, and they contain sub-microscopic, complete skeletal portions, such as long-bone epiphyses of some very small rodents, and microtine molars [about the size of a pinhead]. Here, too, are the developing crowns of cave bear deciduous teeth, from the peg-like anterior dentition to the scimitars masquerading as canines, and the breakfast-tray-shaped molars.
The cave bear teeth are interesting in and of themselves for their bunodont morphology and the degree of wear that they undergo during the lives of these mostly herbivorous ursids. But beyond that, it’s easy to infer that these animals were visiting the cave on an annual period, because you don’t see the complete spectrum of dental development. You see developing teeth at certain stages, and erupted teeth that form a natural series based on easily discerned and distinctive levels of dental attrition. The same is true of the sub-adult long bones–foetal or neonate size and what are probably yearling sized, but nothing in between.
As I’ve promised previously, I hope to be able to grab some images illustrating these points while I’m in the lab next week.
In the meantime, once again until Sunday night, I’m in Czech food heaven. Here’s a picture of some of my friends, standing before the converted stable behind the clock tower where I did my dissertation research. The Pod hradem collection was housed at the level of the window in the clock tower, which, as you can see, puts it in the attic of the building. 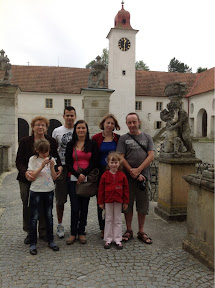 For now, as the Czechs would say, Na shledanou.

This post was made possible in part by the kind and generous gifts I received from several of my subversive friends. I am in their debt, if only for their friendship.