I visited Pod Hradem Cave today for, I think, the first time this year. The weather has been so [forgive me for this and the above use of a scatological expletive] shitty that the path was too treacherous for my archaeologist’s knees to attempt. By the way, the meaning of the rhetorical question that is the title of today’s blurt is to be gleaned later on, and, oddly enough has nothing to do with bears. So…on we go. 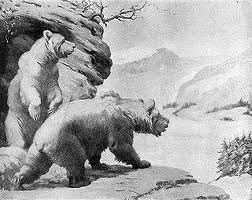 I took some piccies at the cave that I’ll share with you. The first is a view to the right of the entrance. The cave is about 470 m asl, and the highest point of land uphill is about 570. Thus, the cave is formed in what amounts to a promontory in what would otherwise be a very steep talus slope, very near to a precipice with a much steeper [plus or minus vertical] pitch. The precipice lurks where you can see daylight above the talus slope that develops on either side of the cave. This one on the right and the other on the left side of the cave entrance [shown below it] comprise sediments from higher up the slope. [duh!] The two coalesce in front of the cave, which, barring recent clearing to access the cave, produces something akin to a baby’s bib, collecting coasts from directly above and directing them into the cave mouth. 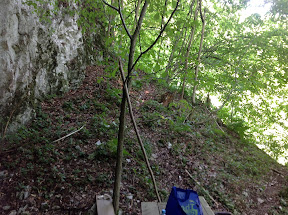 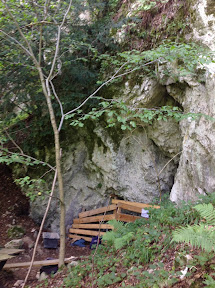 It’s possible to see a portion of the talus slope to the left of the cave entrance in the photo above. This geomorphological situation is critical to accurate interpretation of what’s in the cave in the entrance tunnel, the slope of which is between 20 and 30 degrees downward as you move into the cave. I can’t emphasize enough, and I’ve discussed this with the PI, Lad Nejman, that anything small enough to be transported on 20-degree slope when it’s bucketing rain could have, and very likely did enter the cave from outside. Clasts such as burned and charred bone, charcoal, organic matter of every other sort, even the bones of little creatures nesting in the small solution crevices that occur above the entrance in the cliff face, visible in the shot below. 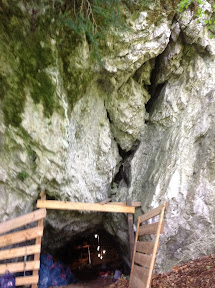 This view includes the LED lighting array that we’re using for illumination. I took my iPad into the cave hoping to take a piccie or two, but after one I realized that, while our primate eyes are able to make sense of the dim light, my 21st century marvel couldn’t. Here’s a view of a cave bear tibia in situ. It’s the blur in the middle of the larger blur. 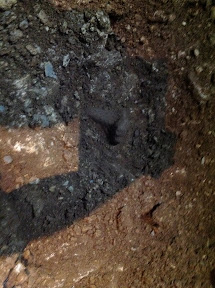 I’ve prolly bored you enough with my tame existence here in the Moravske Kras. So, I’ll finish up with my thought for the month [perhaps the first ever and the only]. Somewhere in this subdued diatribe is the answer to the question of why I titled this blurt as I did.

It follows as the night the day. Wild fantasies about the abilities of pre-modern human Hominidae keep piling up. And there’s no end in sight. Whether the extreme claims derive from genetics, geomorphology, geochronology or plain old, garden-variety ‘dirt’ archaeology, there seems to be no limit to the imagination of the practitioners, nor to the credulity of the editors, referees, and the overwhelming majority of the discipline’s members. My suspicion is that even the most well-meaning scholars are either too busy or too limited in their understanding of the totality of scientific knowledge that goes into making knowledge about the past.
I have personal experience to bear this out [not mentioning any names]. One, for whom I have great respect, and who investigates cognitive evolution, is already busy enough wrestling with the ins and outs of brain function and how each corresponds with changes in the hominids to spend time critically examining each outrageous claim that comes down the pike. This archaeologist has also allowed that geomorphological subtleties are lost on him. Another, a geoarchaeologist whose analytical work I have no quarrel with, seems content to let the archaeologists make sense of his findings as they relate to hominid behaviour. As you can imagine, I believe this has led to some quite erroneous claims for hominid behaviour in the Pleistocene [Lower, Middle, and upper].
I strongly suspect that these are not isolated cases. Only a very few archaeologists that I know possess the intellectual propensity, the diversity and depth of cross-disciplinary knowledge, and the wherewithal to be critical of all but the most mundane archaeological inference. As a result, every new [and usually startling or spectacular] claim is accommodated within a previously formulated working theory. How can I expect the rest of them to exercise their critical faculties when, to my way of thinking, the best of them are so credulous? I can’t! And, obviously, the work of any unsuspecting archaeologist will either perpetuate an old erroneous theory or, sui generis, create a new one. I flatter myself in presuming to call this blog The Subversive Archaeologist, because in reality I am anything but a subversive. I seek only a reasoned approach to archaeological observations, one that’s based on well-warranted assumptions and the widest range as possible of modern analogues against which to compare those observations.
[As the Subversive Archaeologist’s readers will already know, I’m hamstrung by an abysmal grounding in chemistry and physics. Thus I’m unable to examine the technical claims made by practitioners of those sciences and must rely on my understanding of geomorphology, and a good encyclopaedia, to have any hope of being critical of an archaeologist’s erroneous claim made on the basis of chemical or physical analysis.]
Most of the time it seems like an exercise in futility. [Which, as it happens, is a phrase that once graced the first and, alas, final draft paper I was going to write with Diane Gifford-Gonzalez on the vicissitudes of using measures of utility in zooarchaeological studies. That pesky R. Lee Lyman beat us to the punch, as it turned out.] In all seriousness, there are so many claims that are all but wild speculation that I am discouraged by the magnitude of the job ahead for the discipline, much more for a purportedly more objective archaeologist who presumes to refer to himself as subversive.
I’ll leave you to ponder.
By the way. I was unable to steal the time to blog while I was lately ensconced with my Czech family. I hoping that you’ll understand, and accept that my aim of ‘live-blogging’ my experiences here has fallen flat on its face.
– Posted using BlogPress from my iPad