I’m sitting once more in the Grand Bar in the Grand Hotel in Grand Ol’ Brno, in the … [I’ll stop there]. I feel a bit like I’m not in Kansas any more. What cost 25 this morning in Skalný Mlýn just cost 80. It’s So good to be Back in the fast lane. I feel so much like I belong! I’m not really complaining, because I got a deeply discounted room in this place in return for a not-so-deeply discounted return trip via British Airways. [Remember? The ones who lost my suitcase for five days?] Among other things of the grand variety about tonight’s accommodation is that this renovated early twentieth century place of the bourgeoisie has twelve-foot ceilings in every room. Check this out. 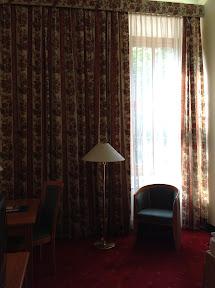 So, it’s not all that bad!
Now, on to the good stuff.
Despite my misgivings about the brief time I’ve had to contribute to this year’s fieldwork, I’m very happy that I’ve finally been able to convince myself that I was dead-on 20 years ago when I concluded that the primary carnivore bone modifier in evidence at Pod Hradem Cave was a canid–most likely wolf. The confirming observations come in the form of numberless pieces of bone, small and large, chewed to shit by an animal clearly lacking the bone consuming abilities of hyenas. There are still, clearly, some hyaena-bothered specimens, such as the proximal ulna, which has almost no cancellous bone, whatsoever, and which was split down the middle with the olecranon process pried off. Impressive. So, we know they were there. Again, something I was able to ascertain in 1992.
Anyhow,
So, here’s to cave-dwelling and ravening animals of all stripes! [He says, as he tips into his mouth the last of his Starobrno draft pilsner costing 80 units.]
Now, as for the immediate future for the subversive one…
I’ve tried to keep my eye on the news ticker in the past three weeks. I’ve been very pleased to see that the nutters are still pounding away at the myth machine. Word has it that now we think the Neanderthals used medicinal herbs and baked chiffon cakes [or something equally as ludicrous]. So, my work’s cut out for me when I get back in the saddle at World Headquarters.
For now, have a safe time while I’m journeying! And think of me in 8 hours, when I have to get up befor God to catch the bus to Vienna.
Ahoj!

This post was made possible in part by the kind and generous gifts I received from several of my subversive friends. I am in their debt, if only for their friendship.