Thank you Nina Jablonski of the Cal Academy et al. for this beauty of a graphic. I can’t wait to erect it the next time I’m forced to comment on the idea of purposeful anything at Sima de los Huesos, Atapuerca, Spain. In fact. I might just say something right now, because this illustrates what I mean when I talk about equifinality. 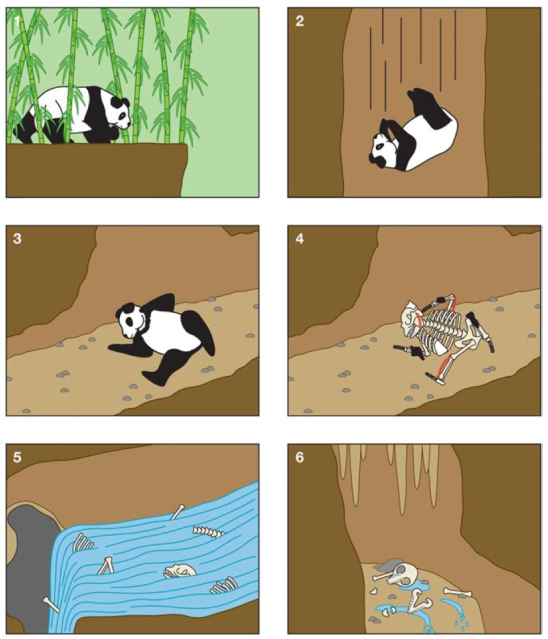 I suppose we can’t altogether rule out purposeful disposal of the panda dead by other pandas. No, wait! That’s not true. We can. If today’s pandas aren’t capable of it, it’s unlikely that yesterday’s pandas were. And so, if this can happen naturally to a panda it can equally naturally happen to one or more members of the species Homo antecessor. [Take a deep breath before saying the following out loud] You can take Paul Pettitt‘s* position and say that the Sima de los Huesos bipedal apes could have been cacheing their dead in a depositional environment virtually identical to that of the unfortunate panda’s (something that neither Pettitt nor anyone else could ever in a million years verify empirically), or you could take the only truly logical position and say that, while it may have been the case that someone dropped each and every Homo antecessor individual into the Sima de los Huesos, it’s equally likely that, panda-like, those Iberian Penisula exponents of Homo heidelbergensis were unfortunate enough to lose their footing at the top of a 13-m deep natural trap. Ergo, there’s no power whatsoever in the Pettitt hypothesis, which is merely a restatement of the same claims made by Juan Luis Arsuaga, one of the principles of the Atapuerca projects. [Yep. The guy even has his own Wikipedia entry.]
A tip o’ the hat to Trina MacDonald for first bringing this to my attention, all the way from (near) Melbourne by internet Pony Express.

* You could pay the $115 for the hardcover, or just $7.48 for the Kindle edition. You can probably guess which one I purchased!