Whoa! That title’s long enough to be the entire blurt. In fact, it could be the whole thing. After looking into the paper by Hublin et al. on the new dates and lithic refitting at La Grotte du Renne, Arcy-sur-Cure and Saint-Césaire (France), I’m no further ahead than I was before. The whole matter might easily be summed up by the metaphor ‘He said, she said.’ 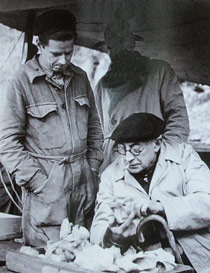 The photo at left shows the Abbé Breuil and André Leroi-Gourhan at Arcy. You may remember that the two, although from different generations, were lions of palaeolithic archaeology in France for much of the twentieth century. Arcy-sur-Cure is of monumental importance for French archaeology [which may explain why Hublin and others are so keen to uphold the determinations of previous generations].

The matter at hand is whether or not the Neanderthals (Mousterian), after coming in contact with the modern humans (Proto-Aurignacian), began to fashion bone and antler into useful tools in emulation of the recently arrived interlopers. This is a big deal in palaeoanthropology, believe me.
So, last year, when Higham et al. published ‘Chronology of the Grotte du Renne (France) and implications for the context of ornaments and human remains within the Châtelperronian,’ one thought that the question had been laid to rest.
Nuh, uh. The other day, Hublin et al. [long-time supporters of the Neanderthals and the techniques and findings of earlier French archaeologists] published a response that, from my point of view is akin to a zombie, ‘Radiocarbon dates from the Grotte du Renne and Saint-Césaire support a Neandertal origin for the Châtelperronian.’

Not knowing really what to make of the technical bits, I set about looking at the results and ignoring what one camp said about the other’s techniques [Hublin et al.’s discussion is not all that flattering to Higham et al.]. At first I thought it was just a matter of ‘He Said, She Said,’ and that we’d never be able to sort through the mess. Gradually I came to see what the two sets of results were really telling me. Here follows a rather untechnical treatment of two highly technical studies that are based on two highly untechnical tactics, only one of which adheres to the strategy of determining whether or not the Châtelperronian is real, or is in fact the reified construct that I and many others believe it to be. The other is altogether fallacious.

He Said
Higham et al. hoped once and for all to put the wooden stake through the heart of the putative Châtelperronian. They selected a sample of 59 organic artifacts from above, within, and below the Châtelperronian levels at Arcy-sur-Cure (Yonne, France), a site with rich deposits from this time period. Of the 59, 19 contained too little preserved organic material to produce a date. The 40 that were left are suggestive of nothing else but that the artifacts in the Châtelperronian levels are a mixture of the earlier Mousterian occupation and that of the later, Proto-Aurignacian level.

She Said
Hublin et al. thought they could turn the tables on Higham et al. by adopting a different sampling technique, one that explicitly avoided dating the humanly modified bone, tooth, and antler artifacts. They say that those artifacts contain too little useable organic material and that they had all been subjected to a process of consolidation in which a coating of chemicals was used to keep the artifact from falling apart. Note that these artifacts are the crux of the debate, because the stone artifacts cannot be used either to date or to distinguish between the Mousterian and Proto-Aurignacian makers. So, Hublin et al. chose nondescript animal bone. They also produced 40 dates. Theirs, they say, are better.
Not only do they finesse the issue through their sampling tactic, they also want us to accept the following. They re-dated the Saint-Césaire skeleton at 36,200 ± 750 BP. This, they argue, means that the Neanderthals lingered in Europe long enough to have been responsible for all of the Châtelperronian artifacts older than that. Of course, it also means that they could have been responsible for some of the Proto-Aurignacian, too, if Higham et al. happened to get those dates right. It also ignores recent findings from England that we arrived there at about 44,000 BP. Wow! We missed France altogether and headed straight for Mother England!
Technical arguments and innuendo aside, they furthermore aver that their better dates do not contain any anomalously young or old estimates, as do Higham et al. Ipso facto, presto-change-o, the Châtelperronian is REAL!!!!

Hold on a minit! First of all, let’s get a picture in our minds of what the stratification at Arcy-sur-Cure is like. In the illustration below you see Hublin et al.’s rendition of the layers at Arcy.

There they are! The subdivisions. Oh! And look! The stratigraphic picture is a little different in this profile. Lots of wavy lenses. XIb is sandwiched inside XIa. Let’s ask Harris of Harris Matrix fame how that’s possible. And those dashed lines. You’ve all used ’em… ‘Well, that must be the contact. It has to be there.’ You know how it goes. If that’s not a sign of archaeological wishful thinking, I’ll eat another radioactive bullet. Ok. So Hublin et al. wanted to simplify the stratigraphic picture, ’cause, really, it’s unimportant. What’s important is that all of the dates in the Châtelperronian levels are where they oughta be. Just look at their OXCal drawing. All nicely ordered from oldest to youngest, as if they occurred in that way in the sedimentary column from which they were drawn
Nothing could be further from the truth. They’re all over the place. [Don’t let the time scale at the bottom of the actual figure fool you. It’s off by 5000 years.*] I’ve annotated Hublin et al.’s Figure 1 with the stratigraphic association and the correct dates at the bottom of the column. The first thing you’ll notice is that, according to the illustration above, the youngest date is from the oldest level. And, you’ll never guess. The oldest date is from the bottom of the younger level. Sandwiched in between are a hodge-podge of dates that have no internal consistency whatsoever. Moreover, I’ll bet my Pirates of the Caribbean authentic Jack Sparrow tri-corner hat that the dates vary randomly with the presumed stratigraphic levels.

What this tells me, and should tell you, is that this is just wrong. How can they argue that they have an internally consistent column of dates if they evidently don’t? It’s a mystery to me. But maybe this isn’t important. After all, Hublin et al. clearly think this kind of topsy-turvey of different dates is insignificant. They’d rather berate Higham et al. for trying to date the actual artifacts!
I’m not done yet. In the table below [of my own making, I might add] you see a bunch of numbers. They represent the youngest and oldest age estimate for a given level for each of the two studies. [For simplicity’s sake I have used the lower end of the error margin for the youngest dates and the upper end for the oldest.] These, by the way, are calibrated dates.  So, they are BP.

Let’s suppose for a moment that the Proto-Aurigancian level is an intact, unsullied stratigraphic unit [i.e. nothing disturbed the sediments such that they might be conned into moving downward in the column]. So much would need to be the case if Hublin et al.’s arguments are to stay afloat. If that’s so, and even if we discount Higham et al.’s results [which Hublin et al. would want you to do], the French estimates for the Proto-Aurignacian level [modern human, remember] range between 29722 and 35020 BP. That means that Hublin et al.’s  three youngest dates for the Châtelperronian ALL fall within the range for the presumably pristine Proto-Aurignacian level VII!! Furthermore, TWO OF THE THREE of Hublin et al.’s oldest dates fall within the range of the [again, presumably] pristine Mousterian level XI. What’s going on?
What’s going on is a systematic effort on the part of Hublin et al. to discredit Higham et al.’s results and to bamboozle the rest of us into accepting their claim that their dates from what they decided, a priori, were the Châtelperronian levels are internally consistent, and that therefore the Châtelperronian is a real entity and not the result of stratigraphic mixing.
If that’s not a circular argument, I’ll eat a tun of foie gras.
I’ll have more to say at a later date. There’s more to be said, believe me. After all, Higham et al. managed to estimate the Proto-Aurignacian dates in accord with Hublin et al. Why did they go wrong with the older stuff? Hmmm.

* I’ve since been disabused of my error in reading the scale in Figure 1, and apologize for any undeserved aspersions cast. I’m. Such. An. Idiot.

7 thoughts on “It’s "He Said, She Said" between Higham and Hublin: Whom Should We Believe About the Reality of a "Châtelperronian" Techno-complex at La Grotte du Renne, Arcy-sur-Cure and Saint-Césaire, France?”