I’ve been watching the media coverage of a paper by Julien Riel-Salvatore and Claudine Gravel-Miguel, which is to appear in the soon-to-be-published Oxford Handbook of the Archaeology of Death and Burial. In it the authors make much of the variability of Upper Palaeolithic (UP) burials in Eurasia since the first modern humans began colonizing at give-or-take 40 Ka. I first heard of their work through the February 23 Past Horizons archaeology web log, which is featured in the blogroll on SA. That blog reported on the article, and included quotes from Julien himself. This morning I noticed that Julien had put up a long post on his own web log, A Very Remote Period Indeed. The authors, through J. R.-S., thought it best to put the article in context, because they feared the media were running with a slant that didn’t do their work justice. In J. R.-S.’s blog was a link to a galley proof of their contribution. It is to that original paper that my remarks are aimed, and not any of the spin—whether that of the media or the authors.

The lion’s share of their 44-page-long contribution comprises 19 pages of tabulated observations, 9 pages of references, 1 1/2 pages of pie charts, one page of histograms and the 1/2-page map reproduced below. [Yawn] The remaining 11 pages of introduction and analysis remind me that, where burial is concerned, I might be tilting at windmills. But if I’m tilting at windmills, these authors are fencing with straw men. According to the authors, it’s necessary to investigate the variability in Upper Palaeolithic burials because the conventional wisdom states that burials from this time are rich in grave goods and stand in contrast to what came before (i.e. Middle Palaeolithic burials). I’ll leave it to you to decide how big a straw man this is. Suffice it to say it was big enough in the authors’ minds to warrant this research.

To achieve their goal of assessing Upper Palaeolithic burial variability the authors set their temporal limits at 45 Ka and 10 Ka. They seek to capture any data from the presumed earliest incursion of modern humans until approximately the end of the Upper Palaeolithic [and prior to the transitional Mesolithic]. The authors are keen to use what might be termed a ‘clean’ dataset. So, they exclude burials from their chosen period in southwest and southeast Asia. Bang, out goes the Natufian, particularly rich in burials, but which might be tainted by agriculture and therefore not useful for comparison with the rank and file Upper Palaeolithic of the rest of Eurasia.

Be that as it may. They get to draw the lines any way they please. It’s what they do within those lines that matters most.

My big beef about this paper stems from what appears to be a whopping great authorial blind spot where the Late Pleistocene climate of Europe and North Asia are concerned. Indeed, the authors make much of what they perceive as the qualitative differences between what went on in two arbitrary temporal subsets—one between 31,250 and 28,750 cal. bp; a second between 13,750 and 11,250 cal. bp. In their words

the number of interments show two peaks, the main one during the 31,250–28,750 cal. bp interval, and a slightly more modest one between 13,750– 11,250 cal. bp. They are separated by over 15,000 calendar years which suggests the pattern is not simply an artefact of time-vectored differential preservation where we would expect to see a continuous increase in the frequency of burials as we move towards the present … . While the absence of corroborating palaeontological and geological data prevents us from ascertaining this … , some very unusual preservation biases would have had to be at play to exclude human intentionality as the driving factor.

No need whatsoever to ascribe differential preservation to any graves that may have existed in the period and the region about which the authors are speaking. There wan’t anyone there to bury! I hate to be the one to point this out to the authors [the Hell I do!], however the time between about 26,000 and about 14,000 years BP circumscribed the Last Glacial Maximum. As you can see from the graphic below, the ice sheet during this period engulfed most of the British Isles, all of Scandinavia and a great east–west swathe of northern Europe. Most of the unglaciated land to the south across northern Europe [the area with few burials during that time] was periglacial. Nothing but permafrost and tundra vegetation. There’s no mystery that the UP people weren’t there at that time, even when they had been in the early part of the UP. It was too friggin’ cold! 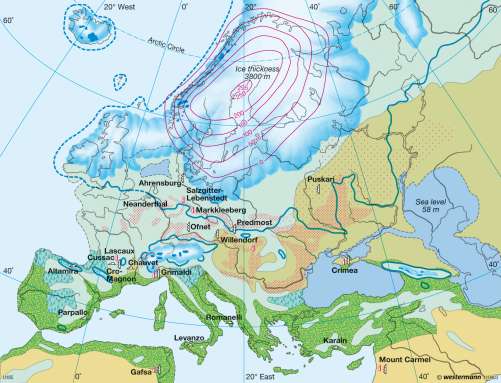 The quote following the map below pretty much says it all.

Straight from the horse’s mouth:

[… the map above] also highlights that only southwest France and the Italian regions of Liguria and Puglia have yielded burials attributed to the two periods. Since most of Italy has yielded Late but not Early burials, this pattern is unlikely simply to be an artefact of regional research histories, a point reinforced by the fact that countries with rich histories of research (e.g. Spain) have yielded no UP burials despite having a rich Mesolithic burial record … . […The figure] therefore suggests that there was a dramatic contraction of the area in which burial was practised after the end of the Gravettian [i.e. during the LGM]. The Late sample also becomes considerably denser over the more limited area over which it is distributed, with areas of Western Europe devoid of Early burials looking as though they were somehow ‘backfilled’ by burial- practising populations (e.g. central and northwestern Italy, parts of Germany).

2 thoughts on “A Very Remote Period and A Gigantic Fail: Riel-Salvatore and Gravel-Miguel on Upper Palaeolithic Burial Variability”