Ka-ching! I got seriously lucky today. I’ve felt as if I were in the doldrums for—it seems like—weeks. Nothing new to grab my attention since March 21. Izzat all? Hm. Seemed a whole lot longer to me. Never mind. I want to give a big shout out to PLOS ONE. Where would I be without it?

The keyword here is “POSSIBLE.” This piece of mind-bending palaeoanthropological analysis concerns a partial mandible recovered in 1957 and assigned to Homo neanderthalensis. So far, so good. In 2012 five of the six authors of today’s inbred inbreeding paper announced a newly acquired age estimate for this specimen. The radiocarbon-dated individual of whose skeleton only a fragmentary mandible remains was alive until 34.5 ± 655 ka [or more correctly 34,540 ± 655 14C uncal BP].
This and other so-called late dates for Neanderthals living in Europe have kept the interbreeding midnight oil burning late into the night in many places around the world. Italy was not about to be outdone! These six intrepid interbreeding advocates thought it’d be a good idea to get a genetic analysis, to see if, like others of its kind in recent years, it was correctly identified as a Neanderthal. And we have a BINGO! Apparently the Mezzena jaw is mitochondrially a Neanderthal.
OK. Late Neanderthal. Check. Genetic Neanderthal. Excellent. But… where does the interbreeding come in? How are these authors able to make such a claim if what they have is temporally, morphologically and genetically a Neanderthal?

Actually, there’s a simple answer, but it involves a not-too simple argument, and the results are anything BUT conclusive. If you ask me, these authors willed the Mezzena mandible into being more like a modern human than the rest of its conspecifics. Believe me. Unhappily for me, Condemi et al. present some pretty sloppy [meaning no disrespect] data presentation, such that one is unable to “repeat the experiment” that they are reporting.

So, once again, I’m faced with my own ignorance where Condemi et al’s statistics are concerned. They’re using Geometric Morphometrics based on Discriminant Function Analysis. [Is that anything like the cases before the Supreme Court of the United States this week?] I was initially in despair, thinking that I could never catch them playing fast and loose with the numbers. Believe me. I’m useless at complex algorithmical thingamabobbers. So, I did the next best thing, and the only thing I could do. I followed the argument as closely as I could, and I did what I could with the numbers that, as a reader, I was handed. I’ll explain on the other side of this magnificent diorama starring Thog.
The table below gives the pertinent measurements of the fossil specimens that—odd thought it be—aren’t used in the geometric morphometric analysis. [I apologize for the resolution.] 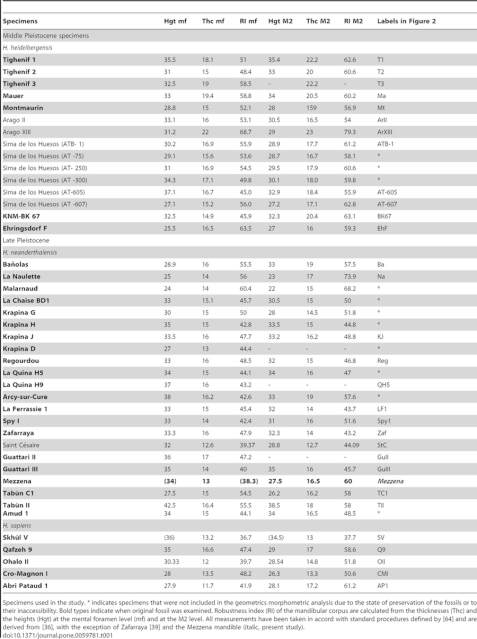 The metrics given in Table 1 are used for a fairly course comparison of how robust the individuals are in relation to one another, which is presented fairly early in the article. What it has to do with the overall argument, I’m in the fog. We have 15 specimens identified as H. heidelbergensis, 22 H. neanderthalensis [including the mandible from Mezzena], and altogether 5 fossil specimens identified as H. sapiens. To beef up the modern sample they included 10 sub-fossil modern humans from the past 7,000 or so years. Alas, we’re given no measurements of the recent people, so we can get no sense of how those ten measured up against the fossil population. [That is a serious shortcoming, don’t you think? It’s not the last.] The result puts old Mezzena right smack dab among the Neanderthal sample. That, for me, is odd.
This matter of robustness is treated as a sidelight to the real number crunching that comes later in the piece. The Geometric Morphometric Linear Discriminant Function Analysis, we’re told, involves collection of observations for ten skeletal landmarks on the mandible.
[I’ve never heard of some of them. Really. Google, for all its unbounded wisdom, turned up only one response when I inputted the term proeeminentia lateralis. I didn’t recognize it mostly because it was invented by a man who literally wrote the book on Morphometrics. Hmmm. So I tried the next one. I can’t remember a time when I’ve seen the following message whilst checking out what the Google has to say: “No results found for tuberculus margnialis superius.”]
I’m gonna go way out on a limb here and suggest that maybe these two, so-called landmarks are unknown outside of the Geometric Morphometric community because they’re [close your ears] just so much bullshit. The remaining landmarks used are good old-fashioned anthropometric standbys. Nevertheless, that doesn’t completely rescue the authors from the vortex in the white porcelain bowl. One measurement they employ is called the planum alveolare, which is illustrated below and labelled plan alveolaire, ’cause it’s in French.

In their article these authors freely admit that the condition of the fragment leaves a lot to be desired: “the alveolar rim is damaged throughout its length, in other words from the level of the first left premolar until the second right molar.” Yet, in spite of the absence of the alveolar rim, they managed to figure out the angle of the alveolar plane. How they managed to get an accurate estimate of the planum alveolare from the Mezzena mandible’s missing alveolar margin is a bit of a mystery. I imagine they’d have a good explanation if you asked them. Unfortunately for us, it’s not obvious, and they give no indication.
As for the use of those made-up landmarks—the proeeminentia lateralis and the tuberculus margnialis superius—it’s an open empirical question if they are useful across species or not. Sadly, we’re not provided with those raw observations on which they based their geometric morphometrics. It seems a shame, since, from what we ARE told about the robustness indicators, the authors needed to do a bit of guesstimation to acquire even those landmarks for their rough comparison. They repeatedly acknowledge that certain measurements were precluded, which one can see from the table above, where the Mezzena estimations are given in parentheses.
Worst of all, the Mezzena mandible WASN’T INCLUDED in the discriminant function analysis along with the other specimens. The authors say that it was “included a posteriori.” That means ‘after the fact.’ I’m therefore mystified. There’s no statement as to what metrics the authors used such that this completely and inalterably Neanderthal individual fell well within the functionally discriminated group containing all of the ‘modern’ specimens. And this is the only datum upon which the authors rest their case for this specimen being a Neanderthal–Anatomically Modern H. sapiens hybrid.
As old Sherman Potter used to say: “HORSE HOCKEY!”
A final word. I’ve always been told that, if it looks like shit, and smells like shit, the prudent course is to give whatever it is a miss. That’s my recommendation to you.
Perhaps one of you with a bigger brain than I can see in this paper what I’ve been unable to.
Thanks for listening!