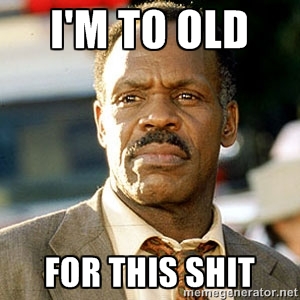 I’m having a truth attack. That’s my way of saying that I’ve been lying to myself. I’ve been telling myself that there’s too much other shit to be done to be spending time looking stuff up and thinking of smart things to say on the Subversive Archaeologist.

Fact. After I put up a tortured piece on the recently published treatment of middle palaeolithic ‘burial’ I received a note from one of the authors, Erella Hovers. It’s copied below. But, instead of fanning the fire in my belly, Erella’s comment knocked the wind right out of me. Much like Danny Glover’s character in the movie Lethal Weapon, I found myself feeling too old and too tired to get back in the fight. It wasn’t just Erella’s words that caused me to say, “Uncle!” Hers is just another in an arm-long list of similar put-downs that bear no relationship to a real argument, from evidence, about the very dead horse that I’m forced to keep beating—the question of whether or not purposeful burial occurred prior to about 40 ka or 50 ka.

As you read through Erella’s response, I’ll be jumping in and out trying to show you which are the most discouraging words. It’s enough to make me long for my own “Home, home on the range.”

Here we go. The italicized bits are Erella’s words; the words in brackets are my *whispered* rejoinders.

[So far, so good!]
Just read your comments on mine and Anna’s paper.  . . .  A few points: the main one is, that paper is NOT about you or your work specifically,
[Um. I don’t recall saying that their Oxford Handbook essay was ‘about’ me. I merely pointed out that their entry was premised on shaky information because they and others have failed to engage with my work in any rigorous fashion.]
so there was no need to go into that all over again.
[All over again! I wish there’d been a once-over!]
Yes, I have read the papers, the comments, and the reply. I remain unconvinced that your argument is the best explanation, hence felt no need to repeat it in details.
[I think we just hit my sore point. E. Hovers wasn’t convinced by my ‘argument’. As if I made but one. Notwithstanding, because she wasn’t ‘convinced’, she gets to play grown-up and launches into a heap of speculative non-sense about what meaning a certain kind of behaviour might have carried with it IF there had been purposeful burial in the MP.]
Like you (or rather, unlike you), i got tired of the back and forth.
[Moment of reality: where Erella’s concerned there was one claim, one counterclaim, one back, and one forth. No more. She made a claim for the depositional circumstances of the Amud 7 infant. I pointed out where she might be wrong. She then failed to understand my arguments, once again, and I had to put her straight. Which, as she puts it, didn’t convince her.]
I did not see you publishing any new arguments or new data.

[‘Scuse me? If the flat-earthers had raised a similar issue after Chris Colombus proved the earth was a sphere and thus illuminated the benighted Europeans of the time as to the reality. I can hear it now. “Hey! Columbus! What have you done for us lately? Got any more fancy evidence that the world is spherical? ‘Cause, if ya don’t, we’re callin’ it a draw! And, oh, by the way, the earth is flat! Nyah, nyah, nyah!]

You did not present also in your rather emotional response.
[Gosh! My eminent frustration shone through the scientistic qualifications that I had to make to save my having to use profanity in the pages of the Journal of Human Evolution!]
So why should we have cited the same old list of claims all over again?
[When did you ever? Wanna know what Erella thinks qualifies as citing the same list the first time? Let’s see. Oh, yeah. Here it is. From what I think was the first published mention of “Grave Shortcomings” after its publication, this is what Erella thinks counts as citing a list of my ‘claims’ in the first place.

1. “Most of the excavators of Levantine Middle Palaeolithic sites have identified intentional burials on the basis of field observations (see Gargett 1989 for refer­ences …).”
2. “Thus, Gargett (1989) suggests that the pits in which remains of Middle Palaeolithic European Neanderthals have been found should be interpreted as resulting from natural phenom­ena.
While this view has been widely rejected on several grounds, it serves to illustrate the problematic nature of the criteria: they appear both too nebulous and too spe­cific and are by no means unequivocal.”
3. “The fact that Middle Palaeo­lithic “burials” appear in small numbers is insufficient to disqualify them as intentional burials (contra Gargett 1989).”

That’s it! I cited a bunch of old publications and Anna and Erella cited my citation. Then they say that my arguments were ‘widely rejected on several grounds’ and can’t even be bothered to cite one such ‘rejection’. Their final mention is either a complete and deliberate fabrication or a dismally poor reading of my paper. At no time did I say that the ratio between numbers of claimed ‘burials’ and the minimum number of individuals represented by the fossil corpus could be used as evidence of anything other than the rarity of specimens recovered in circumstances that provoked the claim of purposeful burial.

That’s how the grownups and the Very Important Archaeologists do it! Don’t like what Columbus says? It’s as easy as pie to get around that. Just say that a bunch of other people don’t believe him and carry on as if he’d never taken a breath on this planet! See above re: Columbus (just follow the yellow arrow at right).]

On the other hand, had you read ours or others papers, you might have found some of the answers you are searching for. Not bothering to read a paper to its end is a good policy for saving time and being righteous, not so much for making a good NEW argument that will move the discussion along.

[I finally understand the difference between being righteous and being self-righteous.]

Another point: we have not “imbibed” any of Pettitt’s claims. I agree with some, disagree with others ( you have NOT seen us use his terminology, and are deceiving people in making this suggestion even implicitly).

[Begging your pardon, Ma’am. What isn’t similar about you and Pettitttttttt naming the concept—and claiming to have done so independently—”cacheing the dead”?]

The ones that seem similar were independently developed by him and us.

[I’d really like to see a timeline of that time-transgressive coincidence!]

In short, the take home message is—even for throwing mud, one has to train if they want to be accurate. Even you.

[I should feel chastened. My mud-slinging, if that’s what it is, has missed the mark. It’s a good thing. ‘Cause if I’d really wanted to sling mud, I’d be ridden out of Dodge on a rail (or off the web, more correctly). Besides, for some odd reason, I continue to feel just tired.]

Please feel free to publish this response on your blog.

Okay. I can stop whispering now. [Or, should I say ‘whimpering’?] Thanks very much to Erella for giving me the opportunity to vent. That’s what it amounts to. It goes nowhere. And it goes nowhere, over and over again. Like Groundhog Day. [I only put that in so I could stick in a picture of Bill Murray, who is the funniest man I’ve ever had the pleasure to watch on the big screen.]

See? Who wouldn’t be tired, after, let’s see … 24 years? Who wouldn’t be frustrated to the point of exhaustion? I’m sure there are many better bipedal apes than I who’d find it easy to keep going. Sorry. I’m not so good at it.

But, I’m sure I’ll shake it off eventually. In the meantime, I gots jobs to find! Buh-bye!