You really must have your wits about you, what with all of the latest findings from the Middle Weirdolithic of Europe coming out while I’ve been busily trying to keep my head above water [sense #2]. The article in question, by Marie Soressi et al [and there are a lot of als here] received some positive press when it first saw the light of day on 12 August of this year. For example, from my home and native land’s national news, the headline read

Modern humans may have copied Neanderthal technology: Leather-working tool dates back before arrival of modern humans

Metaphorically speaking, my own compatriots stabbed me in the back! I gotta tell ya: it’s lonely at the top.

Just look at that authorial line-up! No lightweights here, Toto! And hark who’s listed as the “editor”of this one. Yep. The Great and Powerful Wizard, himself. Pay no attention to that man behind the curtain! But, don’t worry. This will be no argumentum ad hominem.

These authors claim that a few cervid ribs have been purposefully worked to produce lissoirs—hide-working polishers. Three are from excavations at Abri Peyrony and one from Pech-de-l’Azé I.

As with so many before, this paper trumpets these discoveries as the earliest, etc. etc. etc. Horse hockey! The objects are pictured below. All have been identified as cervid, but they aren’t diagnostic, so they could either be Red deer or Reindeer.

I think it best if I spit out my misgivings now, and back them up further down.

These authors have failed to take into account an adequate range of carnivore behaviour in their really quite weak effort to rule it out natural bone modification. The modification that these authors report is the expectable outcome of a bored canine, which, having exposed the trabecular bone, will quickly produce rounding on break margins by licking with its rasp-like tongue. What’s more, this paper’s illustrations clearly show negative hertzian cones that result when powerful jaws and strong teeth assert transverse bending forces and remove flakes of bone from an exposed edge. In at least one of the illustrations in this paper, it’s possible to see what are very likely tooth drags on the broken margins. Soressi et al. also state, without qualification, that deer ribs flare distally, and in so doing imply that the presumed bipedal ape had removed much more cortical bone than could have occurred naturally. But only some of a deer’s ribs widen distally. In sum, the evidence provided for these putative lissoirs is equivocal. Je crois que les lissoirs n’ont pas fabriqué par les neanderthaliens.

The authors tell us that these specimens were carefully examined to find evidence of the manner in which these so-called lissoirs were manufactured. They claim they were able to rule out natural modification because they went looking for the telltale marks they had read about. As they put it

Given that Soressi et al. refer to only those three works as their key to the past, it’s understandable how they could have missed pertinent marks and modifications on the four artifacts. I’ll elaborate. Not one of the studies referred to above is a comprehensive discussion of carnivore modification. Indeed, they each discuss a very limited set, and none deal with canids. For example, Blumenschine et al. (1996) deal with tooth marks on bone made by hyaenas (Crocuta crocuta) and lions (Panthera leo), and not canids, ursids, or other animals capable of leaving marks on bone. Olsen and Shipman (1988) deal only with distinguishing trampling [treadage] modification from stone-tool butchery marks. Finally, Pickering and Egelund are interested in the marks left by processing animal bones using a ‘hammer’ and ‘anvil.’ 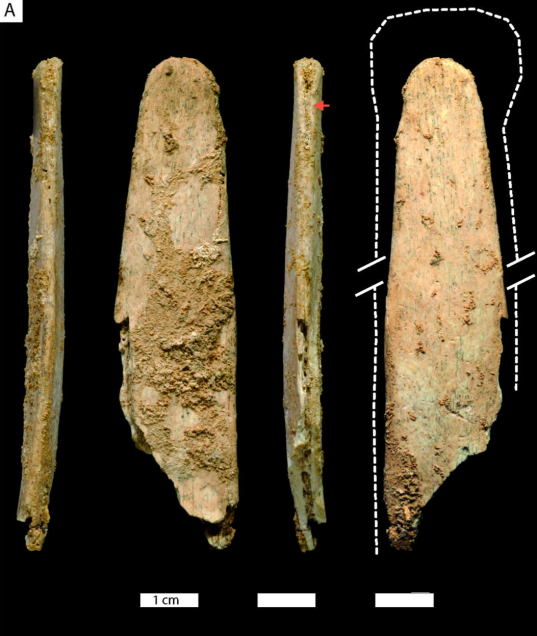 Soressi et al. aver that deer ribs widen distally. They then illustrate what they mean in relation to the largest specimen, AP-7839 (see above). While it is true for certain of a deer’s ribs, it’s not true of all. I didn’t happen to have a full set of deer comparative skeletal specimens, but I did what photo research I could on the Google. And, as you can see in the photo below, deer ribs distally are not uniform. And some, like the second, third and fourth, actually taper distally. It’s easy enough, therefore, to view the specimen above as being one of the tapered variety, which wouldn’t have needed the degree of cortical bone reduction as the authors claim. Nevertheless, this error is small when compared with the major claim of this paper: that these four ‘facts from two French sites were worked by Neanderthals.

And here’s where it gets tricky. I say tricky because, obviously, I don’t have the archaeological specimens in front of me. So, I can’t really say anything definitive about the process that brought about four such similar rib ends. All I can do is plant a seed or two of doubt. Mind you, my doubt seeds are way more logical than their Neanderthals-made-these seeds.

My doubts arise from the knowledge gained from my own professional experience, together with the accumulated observations and insights from three animal bone archaeologists that, one would have thought, formed an authoritative group: Diane Gifford-Gonzalez, Gary Haynes, and Lewis Binford.

The first insight I want to highlight is one having to do with the variable bone-modifying behaviour of wolves. Gary Haynes (1982):

Bones at [Canis lupus] homesites characteristically have been gnawed much more than bones found at killsites. Elements may be carried from carcasses to dens or rendezvous sites to be gnawed at leisure, and may become play items for pups . . . If carcasses or body parts are too bulky for adult wolves to transport to pups or to rendezvous sites, the wolf group may relocate itself close to certain carcasses, which become temporary rendezvous sites . . . Bones at such sites exhibit significantly more tooth scoring and scratching on compact bone tissue, fracture-edge rounding (produced by abrasion against teeth, paws, tongue, and the ground) and gouging and furrowing of cancellous tissue caused by teeth . . . , than do bones found at kill sites. [emphasis added]

Canids have very raspy tongues. When they’re bored they’ll gnaw, chomp, wrestle, and lick a chunk of bone, especially if there is exposed trabecular bone that contains even the minutest quantity of tasty soft tissue. All of the specimens described in Soressi et al. show the kind of rounding that a dog’s tongue can produce in a very licks of its raspy tongue. More importantly, this rounding is found away from the much vaunted rounded ‘business ends.’ Have a look. I’ve left the image huge like this so you’ll have a better chance of seeing what I see.

Re: AP-4493, shown above.
First, on the leftmost view, on the bottom-right fracture margin, check out the little crenulations along the edge. These sort of scalloped edges are most likely the result of a canid, in this case a young one, gnawing at the edge, removing bone flakes in a serial manner. Now look at the middle view, which is the edge-on surface of the leftmost image’s bottom-left fracture margin. Along the slanting margin at the bottom of this view you can plainly see the sheen caused by the rounded and polished fracture margin. This is not the natural state of a fracture margin: it could only have been caused by an abrasive object coming into repeated contact with the margin. It’s unfortunate that we don’t see the other edge-on view. I suspect that we might be able to see the negative flake scars on the crenulated fracture margin that I mentioned a moment ago. Here, too, we are unfortunate that the authors didn’t publish the other edge-on view. It might have been possible to see the topography of the fracture that separated this specimen from the rest of the rib.

Staying with the edge-on view a bit longer, you can observe the profile of the topography on the side of this specimen where the trabecular bone is exposed. Notice that it is in no way smooth like the other side. This would have been the unaltered result of the behaviour that split the rib in two, something that a dog could easily manage. There’s been no attempt to make the trabecular surface smooth, which you might expect if this item had been purposefully made as a hide polisher. The lissoir-weilding Neanderthal might have gotten a blister, or worse, from such an uneven and sharp surface. But I’m not tryin’ t’ second guess a Neanderthal. They were tough. So I’m told.

Next, some more indications of carnivore modification. For the specimen below, I’m added some arrows.  The top pair indicate the points at which my ability to resolve the image fails me. This scar could quite easily be what’s known in the vernacular as a ‘tooth drag.’ On the bottom-right margin you see a negative flake scar that very likely resulted from the hypothetical dog prying away on the edge. The bottom-left fracture margin also looks suspiciously like the kind of damage a dog can do to a rib this size. Again, you can see the crenulations from serially chipping off small flakes. Moreover, the very uneven margin is commonly seen on dog-modified bones. 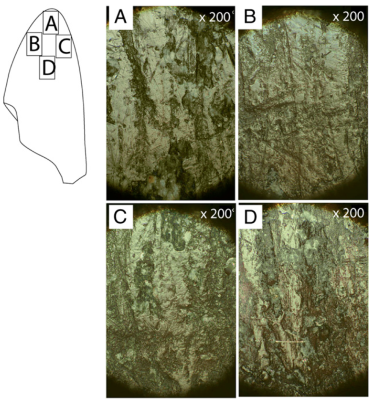 The authors didn’t want to rest on their laurels with respect to specimen G8-1417. So they did some close-up work to illustrate the micro-damage evident on the cortical face. The cartoon on the left shows the locations of the four blown-up portions.

I have to say that there seems no pattern to the gouges seen in any of these views. They vary in width, apparent depth, and most importantly, in orientation. Had this artifact been a real lissoir you might have expected more parallel and uniform modification.

So, I don’t think the authors have done themselves any favours in publishing this part of their analysis.

I’d like to wrap this up, now. I hope that I’ve pointed out enough shortcomings of the authors’ claims to say that CBC news was parroting a questionable set of conclusions when they went to press with this one. As for the Journal of Human Evolution‘s referees . . . ’nuff said.

As ever, comments welcome. Spread the word. ‘Share’ with your archaeological twitter pals and your palaeoanthropological LinkedIn connections. You and I have to get the word out! And speaking of getting the word out. At the top I alluded to The Wizard of Oz and the magic moment when Toto discovers and then outs the old snake-oil merchant passing himself off as the Great and Powerful Oz [which is how I view, for the most part, my palaeoanthropological peers].

And now, for a brief trip down Memory Lane, courtesy of MGM.

Scene from the movie, The Wizard of Oz, 1939. Source: MGM and YouTube


[Juicy aside] According to Soressi et al.

I hope Erella Hovers and a few dozen others are tuning in. The term ‘anatomical connection’ is the English translation of a French expression. In plain English it’s what’s known as being ‘articulated.’ I’m shocked! Shocked, I tell you, that these authors aren’t claiming that the parts they found were purposefully buried. According to Erella and dozens of others, Middle Palaeolithic bipedal ape skeletal remains that are found articulated must—must—have been buried by Neanderthals.]