A tip o’ the fedora to PastHorizonspr.com for this archaeological howler.

D’you remember that story about the guy in [I think it was] Arizona who reckoned he had Acheulean—therefore Homo erectus—stone artifacts from surface sites? It’s a Bizarro World we live in.

Now we have a similar claim from Europe, where they oughta know better!

A rock, in all likelihood a hammerstone, was lifted from a newly plowed field near Lehberg bei Haidershofen in the Lower Austrian part of the Enns (a southern tributary of the Danube River)—the field that’s illustrated below. The hammerstone has a semi-circular reddish stain on it. That stain could have been imprinted by an ochre encrusted Homo erectus hand. Or not.

It’s axiomatic that the minute the word ‘ochre’ is mentioned, palaeolithic archaeologists and palaeoanthropolgists go ape-shit. Only humans use ochre—ipso facto whoever used that rock was a human. Except, in this case it’s highly unlikely. The caption for the plowed field mentions areas that are rich in ochre. You can almost make out the areas that are redder than others.

Archaeologist A. Binsteiner tells us that the ochre-stained hammerstone was found on the same surface as some well-rounded bifaces he found [that may well be Acheulean hand axes.]

There’s no hope of ascertaining the temporal relationship of any two artifats found on the surface that Bitsteiner criss-crossed while searching for evidence that aliens created the pyramids. The photo below is of the fundstellen [find spot] of a handaxe and a phalliform that has use wear from, apparently, pecking another rock, which was also found nearby. The caption, loosely translated, refers to this as the “stratigraphy” of the find spot. 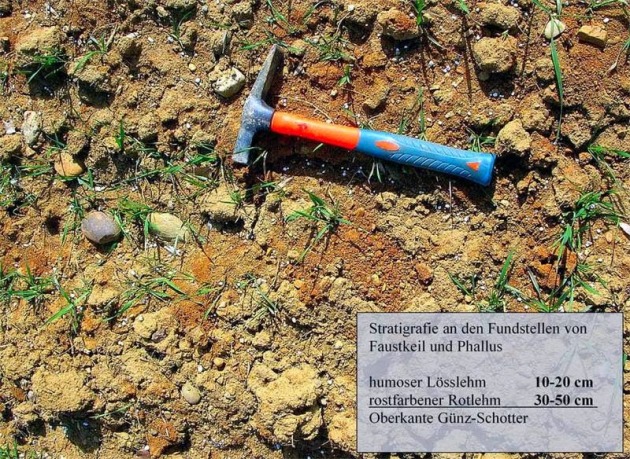 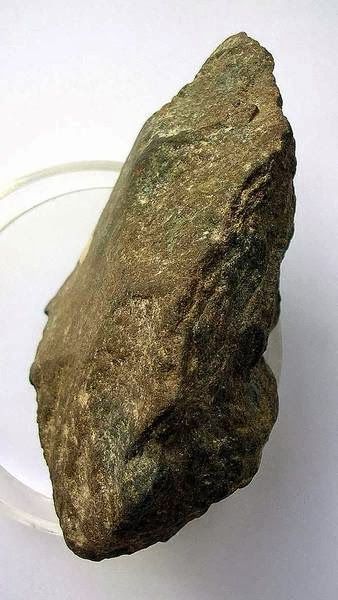 Archaeologist Binsteiner also identified several other well-rounded bifacially flaked artifacts from the same locality—the ground surface shown above. The archaeologist reckons that the sediments that make up this open-air site are at least 500,000 years old.

I presume that’s why he thinks that the ‘handaxe,’ the hammerstone, and the phalliform river-rolled rock are contemporaneous. If YOU think that’s a sensible interpretation, hang around after my talk. I have a bridge in New York that I’m keen to unload for a song.

As these things go in archaeology, it’s quite possible that the ochre hand print is half a million years old, and that it was put there by a precursor of the human species. It’s also possible that pigs will fly, and that roses will emerge from one of my orifices the next time I have a BM.

If you were wondering why this field in Austria hasn’t been featured in Nature, wonder no more. You could put it down to  archaeologist Binsteiner not being boastful. After all, his earlier finds have been reported in some very-not-well-known journals,  such as Linzer Archaeologie Forschungen, Oberösterreich Heimatblätter, and
Archaeologie Online. Meaning no disrespect, I’m guessing that A. Bitsteiner had no choice but to publish in the literary backwaters of European archaeology.

I’m kinda sorry about the circumstances. I’m sure there are many palaeolithic archaeologists who’d’ve eaten up this putative phalliform, almost as rapidly as they would a vulviform engraving on a rock surface in the Dordogne. Although, seeing a phallus in this rounded example of sedimentary rock—identifying it as a phalliform—probably says more about A. Bitsteiner’s unconscious than he’d have liked if he’d been aware of his own neuroses! Wait a second! What’s that I see in the superior view? Is that an inscribed male urethra? I think it is. Well! Dang! I’m wrong again! The stylized urethra petroglyph is the proof that Bitsteiner was right, after all. This is a phalliform and I’m blind. 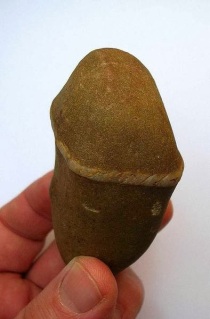 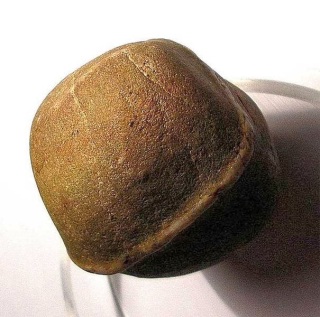 I’m also nearly out of breath at the staggering discoveries here revealed. Especially the mortar and pestle shown at right. That’s way more ‘cultural’ than we’ve seen from H. erectus before now. Where are the Arsuagas of the discipline? Where the De Lumleys? They should be here, if only to witness the silliness that sometimes passes as archaeology. 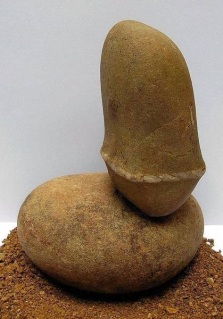 If you’re surface collecting and you find a dinosaur fossil next to an Acheulean handaxe, do you announce loudly that you’ve found evidence that dinosaurs and bipedal apes were contemporaries?

No. You understand that, for as long as the locality you’re surface-collecting has been a surface, the potential for finding items on that surface, from vastly different geological epochs is, one would have to think, high.

Your Honour. The prosecution rests. You’ll get no further phallicisms from me!