Some time ago I blurted out that Google Earth had begun doing pedal-powered “Street Views” of some well-known world heritage properties. The Late-Classic Maya site of Tulum was one of the first, along with Monte Alban in the Valley of Oaxaca [Pronounced WahHAHka. Don’t be ashamed or embarrassed. I used to call it OhAXuhkuh myself until I went to archaeology school]. See instructions at the end of this post if you’re not familiar with Google Street View. And, in the unlikely event that you don’t have Google Earth installed, ask a passing 10-year-old for help.

Today there’s news of the latest addition to the Google heritage horizon: the fascinating and evocative Khmer Empire temple, Angkor Wat, in what’s now Cambodia. It’s more than just a computer gizmo—it’s truly an aid to learning. Did I say an aid? I meant an indispensable aid—one that paupers like me can use to go, virtually, right there, and be one among the other tourists that wander in and out of the images. [Calling them ‘images’ really doesn’t do justice to the technology, even if what you experience is, after all, just a gabillion images stitched together, magically, on the Google campus.] [You can tell I’m impressed. Can’t you?]

This is the same Angkor Wat that recently made headlines for contributing some revelations of an intensive LIDAR aerial survey, published a few months ago in PNAS. 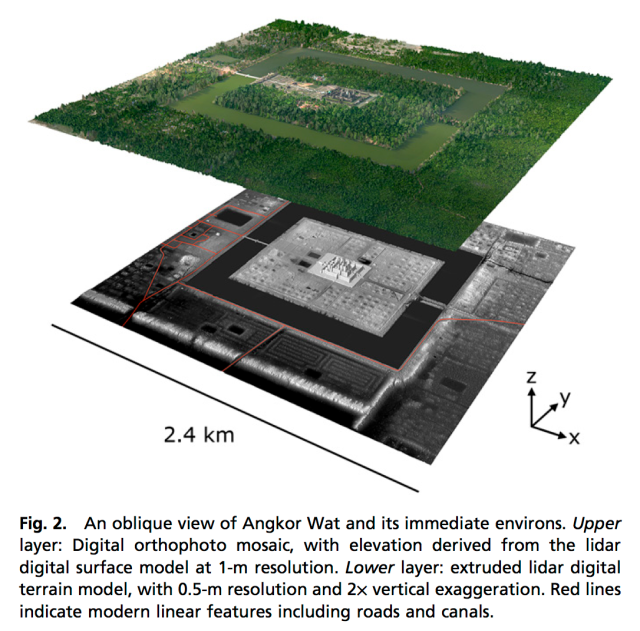 If you’ve just read the caption above you’ll know that Lidar picks up relief changes on the order of 0.5 m, while its horizontal accuracy is about 1 m. Forget the theodolite, Barney! I’ll take one of these site maps, any day!

The montage below better illustrates the incredible power of Lidar. Compare the image at top with the two below it. The upper, Lidar, image is bursting with features on the ground that have yet to be mapped or investigated.

The authors didn’t stop there. They expanded their focus to include a couple of other centers, lesser known outside of Cambodia, and by few scholars but archaeologists, and Medieval historians or theologists.

Refer to the map above for locations of these next two areas that completed the Evans et al. survey. Away from Angkor Wat, the survey focussed on the upland site of Phnom Kulen, birthplace of the Khmer Empire, and early capital. The area had been surveyed and mapped before. But, take a look at the features that Lidar revealed, in the image below. The green bits were known ahead of time. All the red is newly documented. Feel free to be a tad boggled. Ground truthing will probably take decades!

Finally, a third site, Koh Ker. What we knew before, above, and what we know now, below.

* Go ahead. Open Google Earth. Make sure that you’ve checked the Places layer under Primary Database. Type ‘Tulum, Mexico,’ in the Search window, and click ‘Search.’ That’ll get you to the present-day town of Tulum, in Quintana Roo, on the Yucatan Peninsula. Scroll over to the coast and do a little coastal survey. When you see the cartoon evergreen tree that denotes the archaeological ruins, light up the navigation aids to the right of your monitor, then click, hold, and drag the little brown person on the green pad toward the tree. As soon as you start to move it toward the coast you’ll see purple lines appear, superimposed over the satellite image. Hover over one of the purple lines and let go of your mouse button. In an instant you’ll be dropped down in the midst of the Maya ruins of Tulum. Amazement will almost certainly follow. The same instructions will get you to Angkor Wat [except for the part where you type in Angkor Wat instead of Tulum]. More amazement!