WARNING! This article includes a photograph of human remains.

Well, well, well! Even though the next Blue Moon is almost two years off, there’s a new scent on the interpretative breeze coming out of the Americas this week. James “Don’t call me Jimmy” Chatters and a cast of eminent characters have published their findings from investigations at Hoyo Negro, a flooded cave on the Yucatan Peninsula. Hoyo Negro hosts a virtually complete skeleton dated to between 12 ka and 13 ka. That, in itself, is noteworthy, because until now there hasn’t been much in the way of skeletal material from Late Pleistocene North America.

Of course, this already remarkable discovery is made even more so by Chatters et al.’s findings with respect to the genetic affinities of this ancient occupant of the Western Hemisphere.

. . . the distinctive craniofacial morphology and generalized dentition of Paleoamericans can co-occur with a Beringian-derived mtDNA haplogroup. This 13- to 12-ka Paleoamerican skeleton thus suggests that Paleoamericans represent an early population expansion out of Beringia, not an earlier migration from elsewhere in Eurasia. This is consistent with hypotheses that both Paleoamericans and Native Americans derive from a single source population, whether or not all share a lineal relationship. In light of this finding, the differences in craniofacial form between Native Americans and their Paleoamerican predecessors are best explained as evolutionary changes that postdate the divergence of Beringians from their Siberian ancestors.

In plain English: even though this individual’s cranial and dental morphology are significantly different from similar aged individuals from northeastern Asia, this doesn’t mean that the stay-at-home Asians and this individual representing the peripatetic Paleoamericans didn’t share a common ancestor. 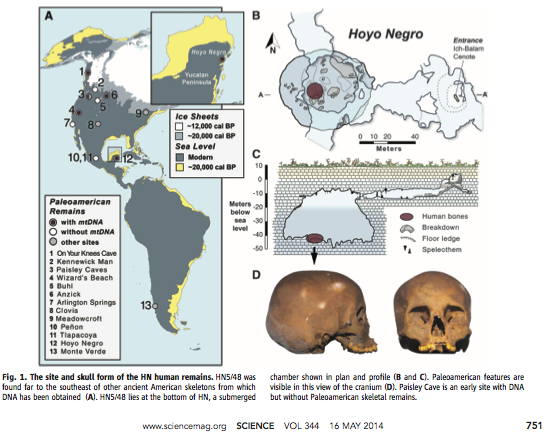 By itself this conclusion isn’t a radical departure from what most scholars have inferred for many decades. However, when you consider the source of the Hoyo Negro genetic study, you might experience an eerie feeling of vu-ja dé—that feeling of never having been here before. That’s because in the past we’ve heard something quite different from out the mouth of Dr. Chatters.

He, after all, is the Clever Dick who made the startling claim that the so-called Kennewick Man was not an ancient Native American, but a Caucasian, and started a prolonged and acrimonious disagreement between Science, on the one hand—represented by J. Chatters—and the Umatilla, a group of Sahaptin speakers whose traditional territory circumscribed the area where the remains were recovered. Whether or not you agree with the premise that the Most Likely Descendants (MLD) of those remains were the indigenous people who inhabited the area at the time of the European incursion, it’s hard to refute the notion that the historic occupants were the MLDs of someone in the region who had lived around the time of the Kennewick Man. Hard for you and I, perhaps, but evidently not so for Chatters and some other worthies of the anthropological community.
Here follows a digression to provide some political back-story.
Anthropology as it’s practiced in North America has a checkered political history, due to a long-established courtship between physical [or biological] anthropology and a racial worldview. I’ve had plenty to say about the relationship between a racial worldview and racism [or bigotry in general], so I won’t bore you with that, today. I will, however, sit you down to tell you that a racial worldview [and its inherently racist philosophy] underpinned what’s known as the skeletal identification of ‘race’ in the physical anthropological tradition.
You see, until there was genomics there wasn’t much you could do with a pile of unidentified human bones if you wanted to know anything about the individual beyond stature, approximate age at death, and sex. That’s because there wasn’t any skin to help you decide the skin-colour group to which the person belonged. Living people are much more readily pigeon-holed because you can just look at someone and know they’re Yellow (Asian), Black (African, Southern Asian, Australian), Brown (Central Asians, Southern Europeans, Northern Africans), White (Northern Europeans), or Red (Indigenous Americans, sort of). That description was glib, I’ll admit. And it both exposes and falsely minimizes the extent to which something as variable as skin colour has long been used to categorize a person as to their cultural, intellectual, and familial background—rather like a lepidopterist would do after pinning a euthanized specimen to a corkboard studded with other similarly euthanized lepidoptera.
The venerable practice of equating skin colour with ‘race’ has been around since the time of the earliest Egyptian classifications of the world’s people. But, while the five colours I cited above have a long history of use in categorizing the ‘races,’ when you really look at it, skin colour is next to useless—by itself—as a means of deciding the likely geographic origin of someone. Take White, for example. White people are often officially classified as Caucasian. Simple. Right? No. Not. Have you ever seen a true Caucasian—from the Caucasus Mountains? Many, if not most, so-called White people would have difficulty finding a useful skin-colour comparison among the literally dozens of ethnic groups inhabiting the Caucasus historically. Among the most abundant are the Georgians, Mingrelians, Laz, Svan, Chechens, Kabardians, Abkhaz, Ingush, Lezgi, Armenians, Ossetians, Kurds, Talysh, Tats, Greeks, Roma, Azerbaijani, and Kipchak Turks (Kumyk, Nogay, Karachay, Balkar). No Swedes, Norwegians, Danes, Germans, Poles, Dutch, Flemish, northern French, Scottish, Irish, English, Welsh, Czechs, Slovaks, . . . well, you get the point.
So, you see. Even with the skin it’d be hard to tell where a person came from if you found them after they’d stopped breathing. Bones alone? No help at all. So, for forensic purposes physical anthropologists compiled dossiers on large numbers of African American, Caucasian, Asian, and Native American skeletons, trying to come up with some specific skeletal traits that would help narrow down the social circumstances (and perhaps the individual identification, by deduction therefrom) of unidentified human skeletal material. They found generally smaller within-group variation than between-group variation in the samples they employed, from which they concluded that they could, with some accuracy, determine the ‘race’ of a person’s skeletal remains. As long as the unidentified persons’s physical characteristics fit within the skeletal morphology profile based on a certain group of skeletons of a certain ‘race,’ Bingo!
But, as you and I know now, there’s sooooooooo much more variability within and between what have been called the ‘races’ that any poor sod whose remains didn’t fit precisely, or were a ‘mixture,’ was likely doomed to anonymity in perpetuity barring serendipity.
Not so the Kennewick Man! Against all reason and logic, Chatters did a few measurements along traditional physical anthropological forensic lines and decided that his specimen was a White Man. And, thus, not an ancestor of the MLDs. It was bollocks then. And it’s bollocks now. So, you’ll be as chagrined as I am to discover that the Kennewick Man yet resides in the University of Washington’s Burke Museum in Seattle, thanks to the political machinations of a host of unreconstructed American physical anthropologists—led by J. Chatters—who cling to the racial worldview like so many Jack Dawsons after the Titanic sank. Their time is coming. But it ain’t here just yet. Or, maybe it is.
So, the chase toward which I’ve been cutting:
Nowhere in Chatters et al. can one find so much as a whisper about the Kennewick Man. Conveniently, his remains were that much younger than those of the Hoyo Negro individual, which allowed the authors to skip any reference to him. But his spirit lives on every page of this paper. And you have to wonder what went through James Chatters’s mind when he wrote the conclusion. I can think of at least a hundred emotions that could potentially have come into play. Let’s all hope that the only one that did was sincere remorse. And, let’s all hope even more for an expedient, sensible, rational, conclusion to the Kennewick Man’s excessively lengthy journey back into the arms of the people whose lives he contributed to, simply by being AN ancestor, not necessarily THE ancestor of any living member of the Umatilla.

** One of the Subversive Archaeologist’s all-time favorite acquaintances.

4 thoughts on “Can the Ethiopian change his skinne? or the leopard his spots? then may ye also doe good, that are accustomed to doe euill* : James (don’t call me Jimmy) Chatters and the Hoyo Negro Paleoamerican”