A number of colleagues have commented that the original article used unnecessarily violent language with respect to Penny Spikins and Paul Pettitt. While I feel that the original text merely evinced poetic license, I have nonetheless moved the piece to a separate page that must be accessed only through this page.

Those wishing to see the Subversive Archaeologist’s pithy remarks with respect to Penny Spikins’s theory of Neanderthal childhood are welcome to click over to the original content at
http://www.thesubversivearchaeologist.com/p/sometime-you-just-need-to-rant.html

Thank you for visiting, and for your cooperation.

O.M.F.G! I Don’t Know Whether to Laugh or Cry.  The Old Man of La Chapelle is a Zombie!

No doubt you’ve seen it in your local paper or on the news, or in a Smithsonian blog, or a White House communiqué. We’ve all just learned that Gargett was wrong all along, that there was never any doubt  that the Old Man of La Chapelle was, indeed, indubitably, unequivocally, purposefully buried by his Neanderthal buddies. It’s like living in a nightmare.

Honestly? I would rather not take anyone “to school.” But, they kept it going. And now I’m gonna hafta douse this re-mythification with more fact than the authors will know what to do with. And maybe then they’ll understand. [It’ll be a frosty day in Hell.]

Okay, I’m only gonna say this once. I don’t want to try to get it published, which I have no doubt I could, but then I’d be repeating myself. And no self-respecting INTJ/ISTJ would want to do that. I’ve already published a very good argument as to why this creature was very probably buried

naturally. And now, OMG. It lives again. These ‘scientists’ have done what I have to believe is their very best work. I’m not laughing, even though their whole paper is ludicrous, because everybody on earth now believes even more strongly than before, that Neanderthals buried their dead, built rockets to the moon, and who knows what else!

These authors’ argument is not subtle. Nor is it one that’s very well thought out. The authors have cooked up some stale leftovers, and added a dash of who-knows-what, to try and convince us that, what they’ve been certain of all along is the real truth.

I s’pose I should be flattered, ’cause I had the misfortune of trying to burst their inferential balloon in 1989 and again in 1999. But who takes any notice? Effin’ nobody takes notice. Despite what they tell you, La Chapelle-aux-Saints was not purposefully buried.

It’s the myth that wouldn’t die. It’s a zombie hypothesis [and just as likely to be true as the very popular fictional life-form, to judge by the recent spate of movies and television series with zombies as the antagonists]. So, if you happen to be Dr. Rendu, or any of the other authors, or if you’ve read all about it in the Enquirer or something like that, and have come here looking for a good laugh at my expense, I would ask you to pay close attention. Because this will need all of your attention.

I’ll use no sleight of hand. No prestidigitation. I mount no illusions. I’m so effing tired of bullshit archaeology and the credulous editors of peer-reviewed journals that . . . Oops! I said a bad word. Well. Ignore it. Oh, but don’t ignore the figure captions, unless you want to miss a crucial bit of this story.

One other thing. This may well turn out to be the longest piece I’ve ever written at The Subversive Archaeologist. That’s because I’ll be more or less acting as a mentor to you, and by proxy, the authors. I’ll be teaching you stuff, and walking you through the maze of smoke and mirrors, and in the end, to enlightenment. OK. That was a bit of vainglory. But, given that the brightest minds of French archaeology [and those people think no one else on earth can compare] don’t seem capable of GETTING IT! . . .

I’m going to assume no prior knowledge on the part of anyone reading this. That means that I’m going to have to teach. And teaching takes a lot longer than telling. Dear Reader, if any or all of this is old hat to you, I’ll respectfully say you’re full of it. That’s because no one else on this planet has thought about this shit for as long as I, in as concentrated a fashion, with as much objectivity and expertise as I. And that’s not a delusion of grandeur. It’s fact. O’ course, that doesn’t guarantee that I’m right. But I’ll always be “righter” than the rest.

In the photo above, you see the cranium (indicated by the top yellow arc), supraorbital tori, the browridges (the two arcs side by side), and mandible (bottom arc) of La Chapelle-aux-Saints 1 (Thanks to Don of Don’s maps for dredging this photo up, and to the photographer,  l’abbé Jean Bouyssonie. I don’t know if this image is claimed to be of the specimen in situ [meaning, in place as it was being excavated]. I’ve heard rumours that the excavators sort of reburied the specimen when a team of big-wigs from the big museum came by to authenticate the discovery. It looks to me as if the whole lump of earth in which these parts of the skeleton were found had been removed en bloc [in a block of sediment sufficient to remove the parts without disturbing their relationships to one another]. Keep this in mind when we get a little further down, because the bloc en which the cranium and mandible are cradled is probably . . . I’m going by the well-known dimensions of that beautiful fossil cranium . . . a minimum of 5 cm, and, given the angle at which the photo was taken, could be twice that and more. 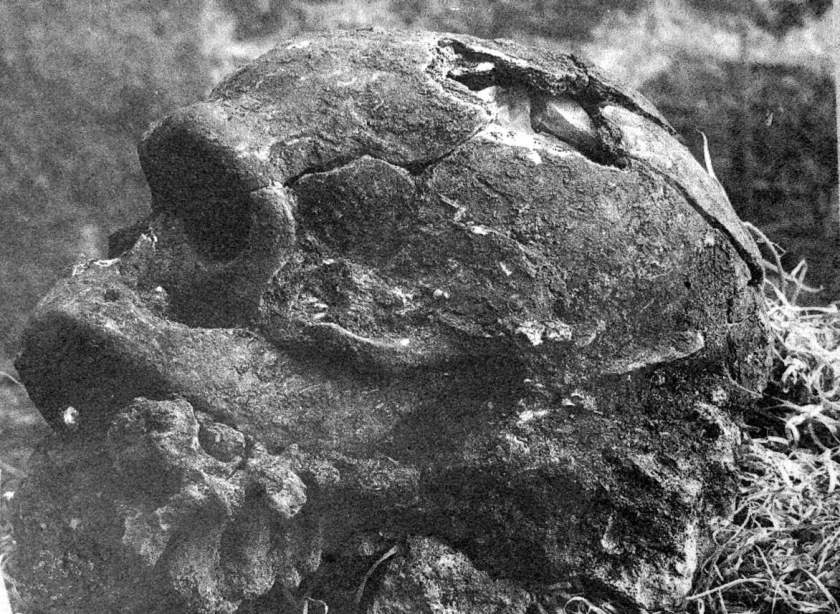 Above you see the cranium and mandible of La Chapelle-aux-Saints 1 (Thanks, again, to Don of Don’s maps for dredging this photo up, and to the photographer, l’abbé Jean Bouyssonie.] You’ll notice that the mandible is almost cradling the individual’s face. The line of the mandible’s bottom is, give or take, at 45° above the horizontal as compared to the cranium.

So, now that you’ve paid close attention to the two iillustrations above, take a look at what’s commonly called the reconstruction of the Old Man of La Chapelle’s ‘grave.’ At least one of the things you see is not like the other in the top two actual photos of the relationship between the cranium and mandible of the Old Man. 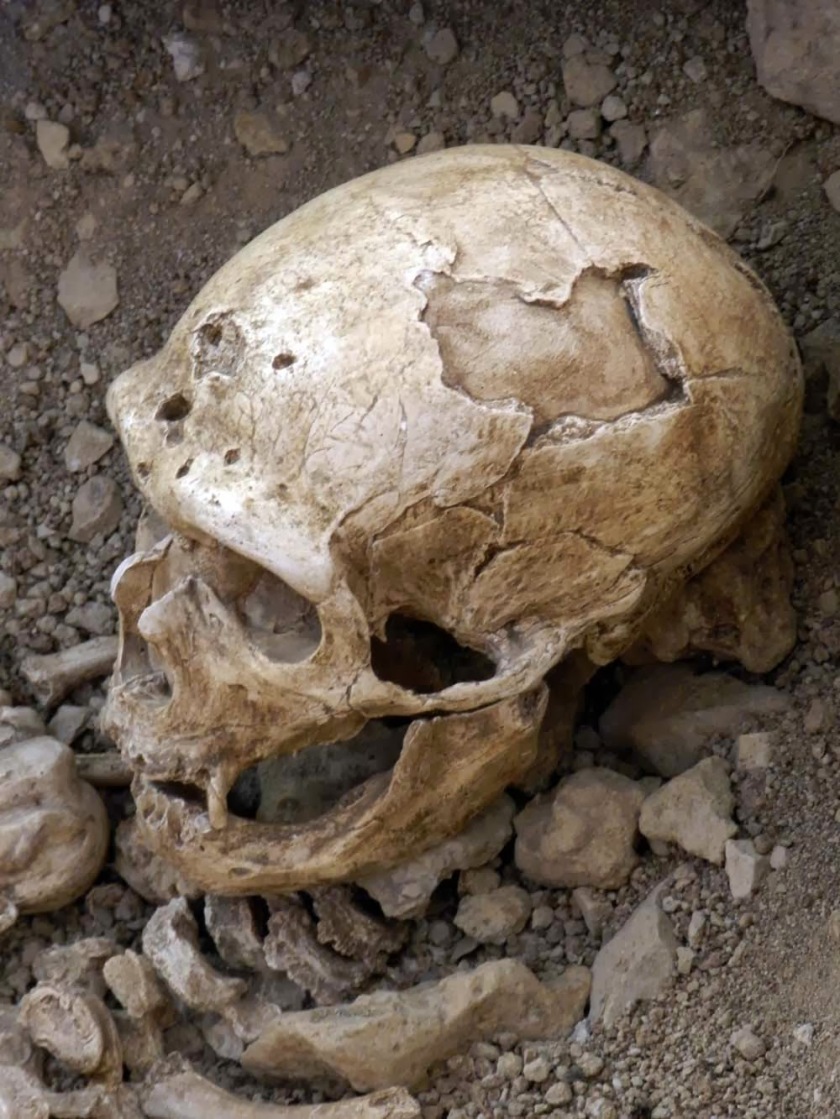 There’s a reason that post-modern anthropologists shy away from calling such displays “reconstructions.” That’s because in most cases such displays aren’t “re”- “contructions” at all. They’re actually “con” “structions” based on what the scientist and the museum diorama maker think it may have looked like before it was dug up. [I’m certain that any similarity between the cant expression ‘con,’ meaning ‘confidence man’ or ‘grifter,’ and the prefix of the word construction is purely coincidental.] In this case, the mandible is lying on its bottom—not at 45° to the horizontal—and most definitely NOT cradling the facial part of the cranium as it did when it was excavated. Instead someone has placed the cranium and the mandible together, much as they would have been if the individual had, indeed, been buried soon after death and before the soft tissue had decayed. Not so La Chapelle-aux-Saint 1.
Now that you’ve seen the “reconstructed” head bits, look at the whole shebang, below. 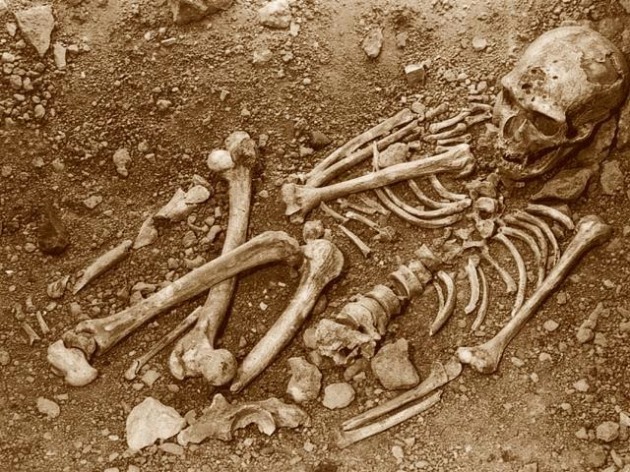 And now compare the museum display with the only—so far as I know—drawing of LC1, as I propose to call him, which appeared in the 1908 publication, reproduced below. I don’t know if we can take the original drawing as the closest to reality. But I DO know that we can’t trust the museum display, either. The drawing and the “re” construction are, patently, different. Not hugely. But, different, nonetheless. For example, look first at the ribs in the display. Those on the right of the backbone [as viewed here] are nicely in order, with the curves all aligned and so forth. The ones on the left of the backbone [as viewed here] are, oddly, upside down relative to where they should have been if the individual had been buried before the soft tissue decomposed. Compare the display ribs with those illustrated below. The ones on the left are in the right relationship to the backbone, and the opposite of those in the display. The ones on the right in the diagram are anything but neatly arranged as they might have been in life.

I can’t emphasize enough how these little discrepancies chip away, inexorably, at the foundation of the myth surrounding not just LC1, but all of the putative Neanderthal [and other Middle Palaeolithic] purposeful burials. Little by little that foundation is undermined. And one day, “in the fullness of time,” I might not have to keep killing this myth, as as if it were my personal vampire or zombie!

And now, the present circumstances, and the reason for my labours.

For 105 years it rested there, warm and cosy under its blanket of backdirt from Bouyssonie, Bouysonnie, and Bardon’s excavations at La Chapelle-aux-Saints (Corrèze, France) in 1908. Alas. It was a short-lived respite for the long-time resting place of the Old Man of La Chapelle.

If you’re an anthropologist taught in the four fields, as most are in North America, you’ll probably know what I’m talking about. The three Bs dug up the mostly complete skeleton of an adult Neanderthal, and reported on it here

[Rob’s translation: Discovery of a mousterian human skeleton in the bouffia of La Chapelle-aux-Saints (Corrèze)]

The three found it in a depression in the marl [which is a kind of un-rockified version of limestone]. The illustration below (also in the 1908 publication) clearly show a very regular-looking depression in which the dense-black-coloured Neanderthal bones are depicted—to my eye—as if the skeleton’s head appears to be about the lowest part of the skeleton in this view. In fact, if this were an accurate depiction of the depositional circumstances of this specimen, I’d be very suspicious as to whether or not the skeleton and the depression were contemporaneous—unless the funeral-home workers thought that the marl looked too hard and so they sort of nested the corpse in some of the dirt before they piled more dirt on top. 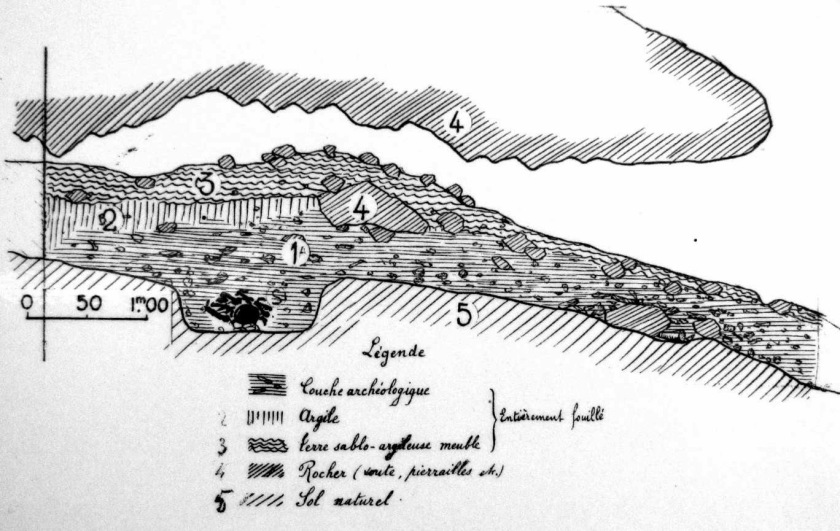 Fact is. If this depiction is accurate, there’s no way in Hell that any archaeologist with half a brain would argue that the skeleton and the depression are contemporaneous [which, by the way, they would need to be if the depression had been dug to receive the corpse]. No. No. No! It’s just one more reason why we should be sceptical of the original inference of purposeful burial, and this zombie version that I’m having to deal with in the present.

And, please, if you’re one of the authors, DON’T start back-peddling and saying, “Mais oui, Rob. But the illustration you’re referring to can’t be expected to be absolutely accurate.”

I think I’ll stop there for today. This is a logical point to do so. And I wouldn’t want to overwhelm you with my criticism of Rendu et al. You’ll need to be fresh when you confront what I have to say.

Thanks for joining me on this most amazing ride. TTFN